RICHMOND HILL, N.Y. (PIX11) — Police have released a video that shows a man dragging a unresponsive woman from a vehicle and leaving her on the side of a street in Queens.

This woman is believed to be the same woman found early Saturday at the intersection of 131 Street and Jamaica Ave around 12:30 a.m. in an incoherent and unresponsive state, police said. Police identified her as Safiya McLean, 18, who is homeless.

The victim was taken to Jamaica Hospital where was admitted in critical but stable condition. She was found wearing blue jeans, a dark-colored coat and multicolored sneakers.

New video has been released that appears to show a man dragging the mystery woman out of the vehicle and leaving her on the sidewalk. 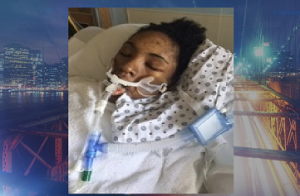