RICHMOND HILL, Queens — One person was killed and two injured after being hit by a car in Queens.

Police responded to a call of several pedestrians hit at Atlantic Avenue and 108th Street in Richmond Hill around 5:32 p.m. When police arrived, they found two cars that had crashed and three pedestrians who were struck.

A preliminary investigation shows that a white SUV, driven by a 43-year-old woman, was traveling westbound on Atlantic Avenue when she ran a red light at the intersection of 108th Street. The SUV was hit by a black Kia that was driving on 108th Street.

The crash caused the SUV to jump the curb, hitting three people on the sidewalk.

The victims as well as the drivers were all taken to Jamaica Hospital.

The investigation is ongoing at this time. No charges have been filed. 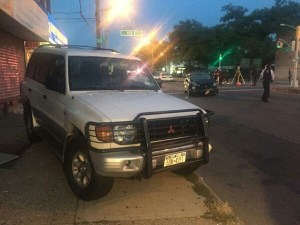 Myles Miller contributed to this story.