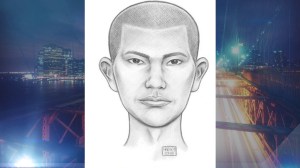 Police released this sketch of a would-be rapist who pushed a 26-year-old woman to the ground in Queens in a Sept. 24, 2014, attack. (Photo: NYPD)

QUEENS, N.Y. (PIX11) – A laser-pointer beamed inside the cockpit of an NYPD helicopter derailed officers’ search for a violent would-be rapist in Queens, but this week police revealed crucial evidence that could lead to the attacker’s arrest.

A detailed sketch and a left-behind sneaker are at the heart of a new plea for help finding a man who snuck up on a 26-year-old woman, grabbed her from behind and knocked her to the sidewalk along Daniels Street between Coolidge and Hoover avenues in Queens.

The victim was walking alone when she was forced to the ground. As the pair struggled on the sidewalk, the attacker told the woman he was going to rape her as he tried to pull off her pants, police said in a Facebook post Wednesday night.

But the woman fought back and the culprit ran away. In his hurry to escape, he left behind a size 8 multi-colored Puma sneaker. 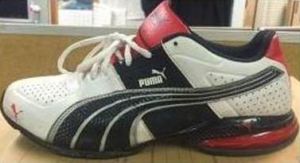 This size 8 sneaker was left behind by a would-be rapist who attacked a woman walking alone in Queens. (Photo: NYPD)

Police are looking for an Asian male, about 30 years old, 5 feet 5 inches tall, 140 pounds with short, black hair, blue and a blue t-shirt.

Immediately after the assault, officers took the air to find the attacker, circling 750 feet above the neighborhood, just south of Grand Central Parkway, in a helicopter.

That’s when a man pointed a high-powered laser beam into the cockpit, blinding the pilots and forcing them to abandon their search for the would-be rapist and instead track down whoever was focusing their laser on the helicopter.

It has been a federal crime since 2012 to point a laser at any aircraft. The beam of light fills the cockpit and blinds those inside, creating a potentially deadly scenario. There have been 99 laser-pointing incidents in New York City airspace since 2013 and nearly 4,000 nationwide, the NYPD said.

No arrests have been made in the attempted rape as of Thursday, and police believe the attacker lives in the area where the assault happened.

Anyone with information in the case is urged to call NYPD’s anonymous Crime Stoppers hotline at 1-800-577-TIPS.