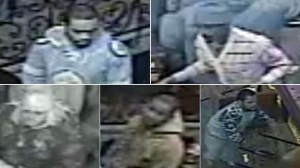 Police released surveillance photos of these men wanted for questioning a March 6, 2015, fight-turned-stabbing at a Queens nightclub. (Photo: NYPD)

ASTORIA, Queens (PIX11) — Police are searching for five men in connection with a brawl inside a Queens nightclub that ended with three clubgoers being stabbed and robbed.

It started about 3 a.m. March 6 at Purlieu Lounge and Night Club, located at 36-04 34th St., police said Wednesday as they released surveillance images of a group wanted in the attack.

The fight escalated and three men were stabbed and then robbed of their cellphones and jewelry, police said.

Police have released images of five men they want to question about the brawl. Anyone with information in regards to this incident is asked to call the NYPD’s Crime Stoppers Hotline at 800-577-TIPS.