The NYPD Animal Cruelty Investigation Squad is trying to get to the bottom of what happened to this dog on Thursday night in Queens.

“We have stabilized her, she’s been on I.V. fluids,” said Paul Miranda.

She’s been named Dasher by the nurses at BluePearl Veterinary Partners in Forest Hills, Queens. The adult female Rottweiler, estimated to be between 5 and 7 years old is being cared for after being taken in on Thursday night. 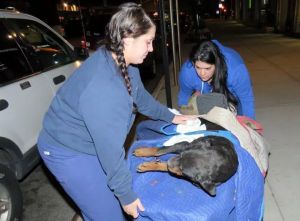 Paul Miranda is the Director here.

“Once we get the results from the X-rays, we’ll know if she has any fractures,” said Miranda.

According to the FDNY, on Thursday night, Ladder Company 135 was returning from responding to a car accident when they were flagged down by someone on the street.

They stopped on Cyprus Avenue in Queens and were told, a spokesperson said, that the dog had been tossed out of a car that kept going.

FDNY members and others on scene stayed with the badly injured dog and called authorities. Members of the news media, the hospital said, brought the dog to BluePearl Veterinary Partners. Miranda showed us Dasher’s large mass that, he said, could be cancerous.”She did have it before, we believe it has been there for quite some time,” said Miranda.Miranda said anyone who is interested in adopting her can call them at 718-263-0099.

Before Dasher can be put up for adoption, Miranda said more tests need to be done.According to the FDNY, one of the firefighters who was there on Thursday night is also interested in adopting Dasher.

JAMAICA, Queens --- A man accused of several anti-Muslim assaults in South Ozone Park is being connected to yet another hate-filled incident in nearby Jamaica, police said Monday.

Back in June, the NYPD Hate Crimes Unit said police were looking for a man connected to at least two anti-Muslim assaults in Queens on Sunday night.

SEOUL, South Korea (AP) — The leaders of North and South Korea restored suspended communication channels between them and agreed to improve ties, both governments said Tuesday, amid a 2 ½ year-stalemate in U.S.-led diplomacy aimed at stripping North Korea of its nuclear weapons.

While the move could certainly help ease animosities on the Korean Peninsula, it’s unclear whether Pyongyang would go as far as to revive previous vigorous cooperation programs with Seoul and get back to the nuclear talks with Washington. Some experts say Kim merely intends to burnish his international image or use South Korea as leverage ahead of a potential resumption of talks with the U.S.

NEW YORK --- While gun violence is up in NYC, so is enforcement and intelligence, according to the Bureau of Alcohol, Tobacco, Firearms and Explosives.

Agents are focused on tracking down shooters who are connected to multiple crimes, something they've seen an increase of, ATF NY’s Assistant Special Agent in Charge Daryl McCormick said. A new partnership between the federal agency and the NYPD was launched to get guns off city streets.

Crowd stones Texas gunman to death after he kills 1, wounds 3

Delta variant accounts for over 72% of recent COVID cases in NY: Cuomo

NYC COVID vaccine mandate extended to all city workers, though some push back

The voice of NY, Angie Martinez, sits down for an extended web interview