Firefighters responded to the scene at 31-06 Farrington St. in Flushing around 6 p.m., for a car into the building. 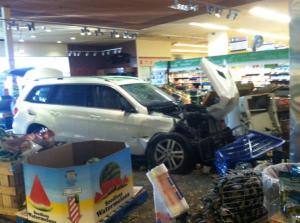 The crash caused part of the ceiling to collapse.

Five people were injured in the crash. One person is in serious condition.

“We had an unfortunate situation occur today when a car drove into our store,” said Vice President of Human Resources Sheryl Schermer.  “We are fully cooperating with the authorities during their investigation.”

Police are investigating what caused the car to crash into the building.

Police pursuit on LIE in Queens

FLUSHING, Queens --- The opening weekend of the second season of the Queens Drive-In started with a sold-out, free double feature that hit home for a lot of people.

“For African American males, they do really need to understand the struggles and the history,” Jeannette Charles, a moviegoer, told PIX11 News.       And that’s why Charles was so excited to bring her 13-year-old son and his friends to the Queens Drive-In to see two new films, "Judas and the Black Messiah" and the documentary "MLK/FBI."     It was a sold out night with 200 carloads of enthusiasm.

Deputy sheriffs were conducting surveillance on Irving Avenue in Ridgewood Friday, having been tipped off to the party. They observed several people entering a commercial warehouse which had its security gate rolled down halfway. Loud music could be heard from outside.

QUEENS — Police launched an investigation into a hit-and-run in Queens that left a woman dead Thursday night.

Authorities responded to a call of an unconscious woman in the vicinity of South Conduit Avenue and Linden Boulevard in the neighborhood bordering Lindenwood and Ozone Park around 10 p.m.