SPRING VALLEY, N.Y. — A local mother spent Tuesday in police lockup, accused of tying her child to a shrub and abandoning him.  The woman’s family called it a misunderstanding, but investigators and prosecutors said it’s much worse.

The mother, Mery Isabel Quinde-Castro, 22, had nothing to say outside of Spring Valley Police Headquarters after she posted $2,500 bail on a child endangerment charge that prompted outrage.

“What she did to that four year old was just totally disgusting and a disgrace,” said Robert Andreassen, a resident of the Blueberry Hill Condominiums.  It was in that complex that Quinde-Castro tied her four and-a-half year-old son to an evergreen  bush outside of one of the condos, according to police.  She, meanwhile, 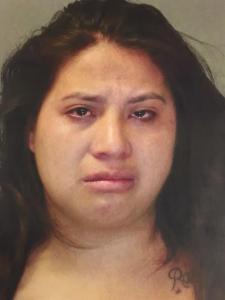 Mery Isabel Quinde-Castro,charged with endangerment for tying up her 4 1/2 year old to a bush (Spring Valley Police Dept.)

was inside the condo, doing her job, which is, ironically, providing child care for a family that lives there.

“A neighbor called,” said Spring Valley police chief Paul Modica, and reported that there was a boy alone in the complex “tied to a bush. The way she described it, [the boy was] tied to a tree, and [she] called the  police.”

The chief said that Quinde-Castro strapped the boy’s leashed backpack on to him, and then took the leash, which looks like a long dog’s tail, and tied it to one of the bushes in front of the condominium.

“The child could have been taken, injured,” said Chief Modica.  “Definitely not great parenting there.”  He said the boy had been alone, tieed up, for about a half hour.

But Quinde-Castro’s sister, Rosa, said the boy had spent the morning in the condo where his mother works, and that the boy adores the little girl for whom his mother provides child care.  Quinde-Castro had brought her son out with her to take out the trash, according to her sister, but he didn’t want to go back in.  Her sister said that the boy has behavioral issues, and regularly needs to be physically attached to an object, to keep him from running away. 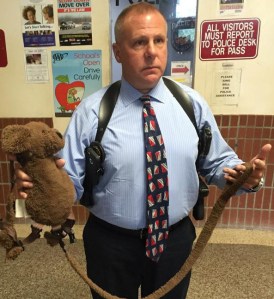 “I use [it], my sister, and my sister-in-law use,” said Rosa Quinde-Castro, the accused mother’s sister.  “She’s a good mother,” she said, minutes before posting her sister’s cash bail.

For now, Mery Isabel Quinde-Castro is a criminal defendant.  Her charge is a misdemeanor, but the judge said that “because of the nature” of the crime, bail had to be set at the $2,500 level that prosecutors had requested.

She has another court appearance scheduled for Thursday of this week.  Meanwhile, her four year-old son is staying with another of Ms. Quinde-Castro’s sisters, and his mother has full visitation privileges.  Child Protective Services is monitoring the case.

ROCHESTER, N.Y. — A New York State trooper shot and wounded a man who authorities said was threatening officers with a butcher’s knife as they tried to arrest him in Rochester for allegedly violating his parole.

The man was reported in guarded condition at a local hospital after being shot Friday. His name hasn't been released.

ROCHESTER, N.Y. -- Prosecutors overseeing a grand jury investigation into the death of Daniel Prude last year in Rochester, New York, undercut the case for criminal charges with testimony from a medical expert who said three police officers who held Prude to the ground until he stopped breathing didn’t do anything wrong.

Dr. Gary Vilke told the grand jury that Prude, a 41-year-old Black man, died of a heart attack caused by the medical phenomenon known as excited delirium. He said the officers' actions, which included placing a mesh hood over Prude's head, had no impact on his breathing, according to transcripts made public Friday.

SPRING VALLEY, N.Y. — Two candidates who have been convicted on corruption charges want to be mayor of the suburban New York village of Spring Valley, but a judge ruled that only one is eligible to run.

Wednesday’s ruling by State Supreme Court Justice Paul Marx means that former Spring Valley Mayor Noramie Jasmin can run for her old seat in the June 22 Democratic primary even though she was found guilty of federal mail fraud and extortion charges, and served four years in prison.