TARRYTOWN, N.Y. — Six of the seven lanes on the Tappan Zee Bridge have reopened under Gov. Andrew Cuomo’s direction after a crane collapsed Tuesday afternoon.

Four people were injured when a crane came crashing down across the lanes around noon. Rockland County emergency services officials previously said five people had been hospitalized.

Two people were injured in a car crash on the bridge when they swerved to avoid the crane. A construction worker was also injured.

They are all reportedly doing OK.

“Miraculously there were no serious injuries,” Cuomo said.

The crane operator also appeared to be uninjured. 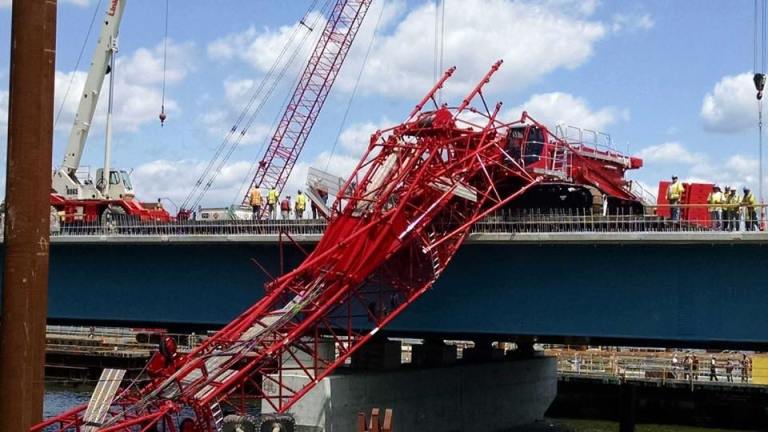 The governor provided a timetable for the reopening in a second press conference at 5 p.m.

Cuomo said the three northbound lanes would be opened “within minutes” of his briefing.

The right lane on the southbound side sustained “significant damage” and will remain closed until further notice.

Television helicopter images earlier showed emergency crews pulling out at least one person from a car. Drivers were milling about on the span, just steps from the collapsed crane.

The crane did not fall on any vehicles.

Cuomo said two cars got into a minor crash to avoid hitting the crane.

“I’d rather err on the side of caution,” said Cuomo. “From the surface it looks like only one lane was damaged.”

The crane collapsed on the bridge’s Rockland County side, but caused traffic to be blocked for miles in every direction.

After the crane collapse, the New York State Thruway Authority initiated the “Tappan Zee Bridge Diversion Plan,” prompting all entrance ramps normally allowing traffic to enter the southbound side to be closed.

Drivers were urged to use alternate routes including the George Washington Bridge, Bear Mountain Bridge and the Newburgh-Beacon Bridge.

No boats were allowed in the immediate vicinity of the collapsed crane, the Coast Guard said. Boats in the area should proceed slowly and be careful to avoid any debris in the water. A Coast Guard team is on scene to check for any possible pollution and damage to barges as a result of the collapse.

A new Tappan Zee Bridge is under construction beside the old one, which dates to the 1950s and will be demolished once the new bridge is completed. The original bridge is a notorious traffic chokehold, and also has long been a source of concern among some engineers about its viability.

An investigation is underway into why the crane collapsed. Wind does not appear to be a factor, according to Cuomo.

En route to crane toppling into Tappen Zee-signs in the #bronx warning of a crash . All lanes closed @PIX11News pic.twitter.com/YD72aDzPcI

This image comes a driver on the bridge .All lanes closed #tappenzee pic.twitter.com/ophgqbLF2R