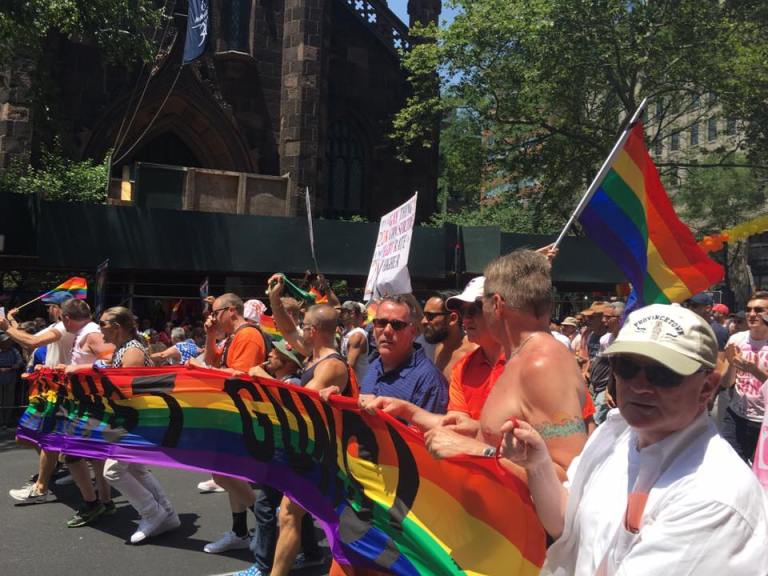 NEW YORK — A new group in the LGBT community has formed to spread awareness about gun violence.

Gays Against Guns formed in the aftermath of the Orlando shooting and met on June 17 to officially organize and make plans to be in the NYC Pride March, according to a press release.

The group, comprised of LGBT New Yorkers and allies, marched during the Pride parade on Sunday to help remember the 49 victims of the Orlando shooting and to spread awareness of their message.

However, its main goal is to advocate working through peaceful actions to prevent another massacre like the Orlando shooting.

The group will focus on gun policy in the U.S., specifically banning access to high-capacity magazine guns and assault weapons, creating stricter background check systems, banning gun sales over the internet and closing the loophole that allows weapons sales at gun shows without background checks.

The group’s website said it aims to formalize its responsibility and find its place within the larger gun control movement.

“Government has failed us. Life is valuable, and we’re at our best when life is celebrated in peace. Actions speak louder than petitions, lobbyists, prayers, thoughts and moments of silence,” the statement read.

Group founders Kevin Hertzog and Brian Worth explained that the group came into existence to fight back against what they believe is a dangerous mix of homophobia and gun violence in the U.S. along with the fact that LGBT individuals are the likeliest target for hate crimes.

“We want to present as large a crowd as possible on Sunday [at the March], to show New York and the U.S. that LGBTQ people are outraged,” Hertzog said in a press release. “The current situation with guns in America makes us gag in disgust!”

While the group just formed, they plan to use direct action and “engage people who are unsure about how to act to change our world.”

A Facebook post on the group’s page says they are currently figuring out what their exact aim will be, but their main belief when it comes to guns is a universal ban on assault weapons and closing the loophole involved with online and gun show sales.

The group plans to meet after Pride to discuss a strategic plan they will follow leading up to the presidential election in November.

“Gays Against Guns is taking this fight to the NRA’s front door,” he said in a press release. “Our community has been fighting for gun control as part of other organizations for many years, now we’re starting our own. The LGBT community has vanquished bigger enemies than the NRA.”

An unofficial spokeswoman said in an email that the name of the group is under discussion to be more inclusive.

New Yorkers celebrate Juneteenth as it becomes a national holiday

NEW YORK --- Juneteenth --- which commemorates the day in 1865 in which the final slaves were told that the Emancipation Proclamation had been signed --- has been celebrated for years, but not on the level it’s being celebrated in 2021.

For the first time, it’s a federal holiday and people across New York were ready to enjoy themselves.