TEANECK, N.J. (PIX11) — A tractor trailer overturned on the New Jersey Turnpike Friday morning, killing the truck’s driver, spilling hundreds of gallons of fuels onto the roadway and snarling the morning commute.

The wreck happened along northbound I-95 at the I-80 merger, near Exit 69, according to New Jersey State Police.

The tractor trailer flipped over, crashing into another vehicle and landing perpendicular to the roadway. It left about 20 feet of gnarled guardrail in its wake and hundreds of gallons of fuel spilled onto the highway.

Drivers stopped nearby were told to turn off their engines.

The driver of the tractor trailer was pronounced dead at the scene. The driver of another vehicle also involved in the crash was transported to a hospital. 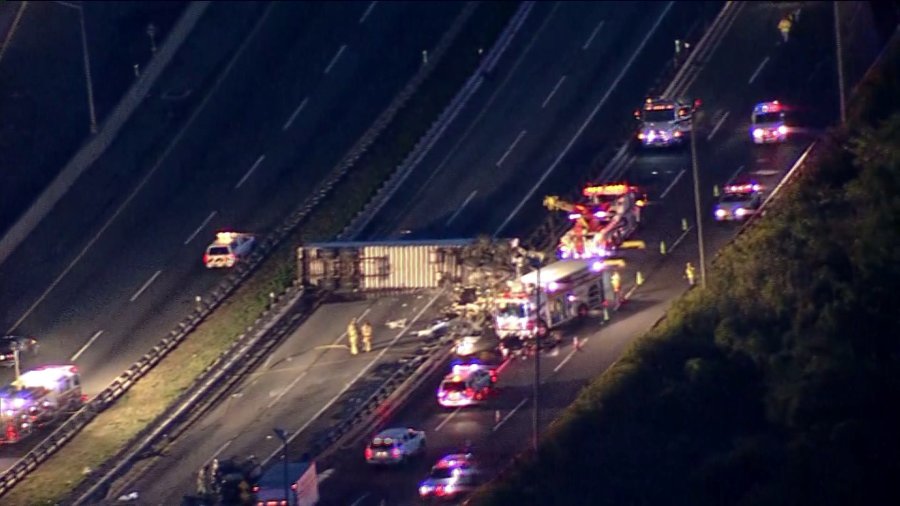 A tractor trailer overturned on the New Jersey Turnpike in Teaneck on Friday, Sept. 26, 2014. The driver of that truck was pronounced dead at the scene. (Photo: Air 11)

The fatal crash is expected to cause major delays throughout the morning commute.

One lane is filtering vehicles north off the express lanes to Exit 70. One inner lane is open, taking drivers toward I-80 west.

Drivers can take routes 1 or 17 to reach the George Washington Bridge, and the Lincoln Tunnel is also a possibility for city-bound motorists.

Getting to the George Washington Bridge via I-80 is unaffected by the crash.

It could be several hours before the crash is cleaned up and the roadway is reopened, officials said.