PATERSON, N.J. — Imagine living in a trailer with no heat and all you have is a torn up mattress in a place covered in feces.

It’s unthinkable — but, that is how some pets are treated.

Paterson Animal Control and Paterson Police responded to an anonymous complaint on Vreeland Avenue in Paterson on Saturday. The caller said a dog owner had moved away and left behind his two pitbulls.

Animal control found the pitbulls living in dismal conditions. The dogs were apparently living in an approximately 25-by-7-foot office trailer. It was cold inside and the floor was covered in dog defecation. They were laying on a mattress that had been ripped apart. 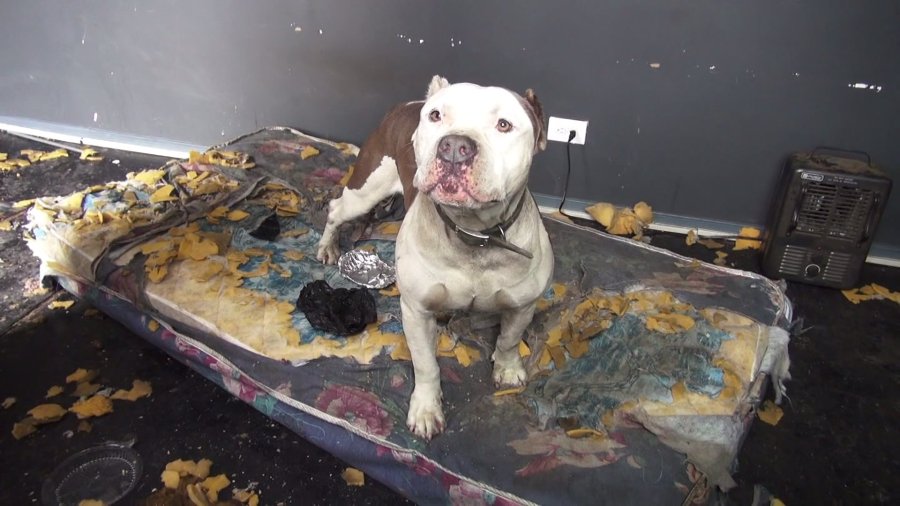 Two men who identified themselves as friends of the dog owner were not phased by the conditions these animals were living in.

“You know people feel like they’re suffering and their really not. It’s cold … it’s understandable. And that’s it,” he said.
Paterson Animal Control didn’t feel the same way. They asked the men to fill out some paperwork that allowed them to remove the dogs from the site.

While investigating the scene, one of the men lifted a log overhead while yelling at the animals to get back inside

“Could you imagine how these poor dogs felt? They don’t want to be outside,” said John DeCando, Chief Animal Control Officer in Paterson.

DeCando’s team just rescued three other pitbulls from the cold on Friday. Responding to another anonymous call, an officer found the dogs chained up outside a home on Maryland Avenue.

“When we got there, it was like sub-degree weather. 7, 8 degrees. The dogs were absolutely shivering. I mean when the one dog came to me, we took him off the chain, actually jumped into my arms,” said DeCando.

Today, the dogs are at the Paterson Animal Shelter. Their feet are bloody and calloused. DeCando says their injuries were caused by sleeping and standing on ice. Their tails were also wounded, he explained it was from wagging them and hitting the home’s exterior wall.

“With the weather coming in tomorrow night into Monday, God knows what would have happened. These dogs might have died,” he added.

Paterson Animal Control left a note at the Maryland Avenue dog owner’s home on Thursday night, but as of Saturday afternoon, no one had called looking for the dogs.

DeCando is urging anyone who sees a dog out in the cold or being mistreated to call their local animal control, police or the SPCA.

The owners of the dogs confiscated in Paterson on Friday and Saturday could be facing a $1,000 fine and up to 6 months behind bars, if convicted on animal cruelty charges.