ROBBINSVILLE TOWNSHIP, New Jersey — A missing New Jersey woman, who was a student at the University of South Carolina, was found dead after police say it appeared she got into a car that was mistaken for her Uber, Columbia Police Chief William H. Holbrook said Saturday.

Police said Josephson was waiting for her Uber around 2 a.m. Friday and got into a black Chevy Impala outside a bar, that was being driven by 24-year-old Nathaniel David Rowland. Police do not believe Rowland was an Uber driver.

Josephson’s friends reported her missing around 1:30 p.m. Friday, after they became concerned when she didn’t show up at her downtown residence or when she did not answer their phone calls.

Officers stopped the Impala around 3 a.m. Saturday and Rowland jumped out and tried to run. He was soon caught, police said.

Inside the car, investigators say they found Josephson’s blood, her cell phone,  bleach, germicidal wipes and window cleaner. The child safety locks on the vehicle were engaged, which would prevent someone inside the back to escape, police said.

Rowland was taken into custody and charged with murder and kidnapping.

The investigation regarding USC student Samantha Josephson is now a homicide case. Her body was found by hunters in rural Clarendon Co. late yesterday afternoon. Suspect Nathaniel Rowland has been charged w/ Murder & Kidnapping by SLED. Agents have been an integral part in case. pic.twitter.com/2tj8TVRAex

Columbia Police released two photos on Twitter which showed the 21-year-old seemingly talking on a phone, then leaving in a black Chevy Impala on Harden Street. 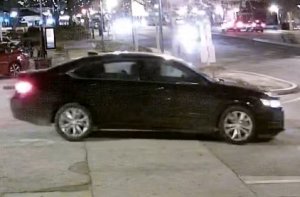 Josephson was a native of Robbinsville Township , New Jersey, and a senior political science major at USC.

It is with tremendous sadness and of a broken heart that I post this! I will miss and love my baby girl for the rest of life. Samantha is no longer with us but she will not be for gotten. It is extremely hard to write this and post it but I love her with all my heart. I could continue to write about her but it kills me. I sit here and cry while looking at the picture and write this.

“It is with the heaviest of hearts that I write these words this morning,” USC President Harris Pastides said in a statement released on the University’s website. “Our prayers are with the family and friends of Samantha Josephson following the devastating news of her death. Times like these leave me searching for words of wisdom and comfort.”

A spokesperson for the New Jersey township expressed their condolences through a statement on the township’s official Facebook page, saying in part, “Mayor Dave Fried, B.A. Joy Tozzi and everyone in Robbinsville Township are devastated by the news that the Josephson family of Robbinsville have lost their precious Samantha. Our thoughts, prayers, boundless grief and endless support are with Seymour, Marci and Sydney at this unimaginable time.”

Restaurant industry concerned as winter and omicron arrive in NYC

The COVID-19 variant omicron has arrived in New York City as many head indoors amid a major drop in temperatures. The situation has those in the restaurant industry concerned, and diners rethinking their physical comfort eating outside and safety inside.

A NYU grad is giving hope to kids in the poorest school districts by connecting them with leaders in multi-billion dollar companies.Joshua Pierce's company called The Diversity Org is giving all kids an equal opportunity to be economically successful, no mater what their background is.You can head to thediversity.org to see how you can get involved in this incredible organization.And you can check out "My Hustle" on the Whistle channel on YouTube to see the full episode on The Diversity Org.

A teenager with Down syndrome who dreams of one day becoming an officer got the opportunity of a lifetime when he celebrated his birthday with the NYPD on Friday.

US employers added only 210,000 jobs in November

Person fatally struck by 7 train at Grand Central; extensive delays in both directions

Man, 75, pushed, held down and pickpocketed by duo in Queens park