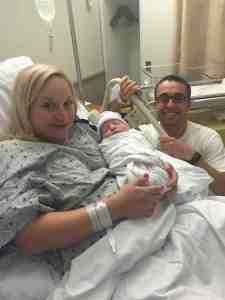 SADDLE BROOK, N.J. — A 3-month-old baby who was hospitalized after a babysitter dropped him died two days before Christmas when his family removed him from life support.

A family member was taking care of the baby at a Saddle Brook home when he “accidentally fell from her arms and hit the floor with his head” about 3 p.m. Tuesday, the police chief told NJ.com.

The baby was unconscious and unresponsive when police arrived. He was taken to the hospital with severe head injuries.

The babysitter’s name was not released, but Saddle Brook Police and Bergen County Prosecutor’s Office will be investigating the infant’s death.

The 3-month-old baby boy was Mark Modzelewski, 32, and Nicole Nicastro, 34, only child.

A fundraising campaign was also created to help Modzelewski and Nicastro pay for costs. Benjamin DiFranco, who created the GoFundMe on Nicastro’s behalf, wrote the doctor’s had done everything they could.

“Even if he wakes up he will have no quality of life; not being able to walk, talk or function on his own. This is the one of the hardest decision decision anyone will ever have to make,” DiFranco wrote on the page.

The campaign has raised more than $21,000 as of Saturday.

A separate GoFundMe campaign was set up by family member Alissa Cabrera to create a memorial for Reece Modzelewski in Chrome Park or Carteret Waterfront Park. The memorial will consist of a bench and a tree, according to the GoFundMe page.

Masks and vaccines top of mind in tri-state

Fatal motorcycle crash on I-287 in New Jersey

Multiple shark sightings off Long Island: What’s bringing them and how to avoid them

LONG ISLAND, N.Y. —  After multiple shark sightings off the shores of Long Island this week, red flags were up at Jones Beach on Thursday morning signaling no one’s allowed in the water.

Some beachgoers said they were scared to go into the ocean.

NEWARK, N.J. — New Jersey mothers and their newborns can get in-home visits by a nurse under a new law.

Multiple shark sightings off Long Island: What’s bringing them and how to avoid them