NEW YORK— More than 4000,000 demonstrators march toward Trump Tower Saturday for the Women’s March on NYC, one of the many protests happening throughout the nation.

The protesters, mostly women but also men and children, gathered at the starting point about 11 a.m. at Dag Hammarskjöld Plaza between 46th Street and Second Avenue. The massive crowd moved down 42nd Street where by 2 p.m., thousands of people were slowly making their way toward Trump Tower on Fifth Avenue.

Mayor Bill de Blasio said on Twitter about 400,000 attended the march throughout the day.

A big thank you to the organizers and the men and women of the NYPD for keeping 400,000 New Yorkers safe during today’s #WomensMarchNYC. pic.twitter.com/vkGharcQqk

Donning pink hats and holding signs that read “This is my body,” “Women power,” “Protect what you love,””Women’s rights are human rights,” and more, protesters have their own message and reason why they are marching.

“We cannot have Trump perpetuating the kind of hateful rhetoric that had divided this country and we need to make sure it stops,” Jennifer Glennon said. She is marching with her family by her side.

“I have two daughters and nothing could be more important to me than women’s rights,” Glennon said.

“We are really upset with our election process. We feel like our voices weren’t heard and we are peacefully protesting our constitutional right,” Matt Hennessy told PIX11 News.

Protesters are calling for empowerment and demanding President Trump and his new administration give women an equal voice.

“A lot of us are on affordable healthcare and we need to continue to protect that so that everyone has their healthcare and are not kicked out of their plans,” Cheyenne Gleason said.

The Women’s March on New York City is one of hundreds around the country staged a day after the inauguration. The event is the “sister” march of Women’s March on Washington, where tens of thousands of people are also marching. People across the U.S. traveled to the nation’s capital to partake in the event.

Though many are marching against Trump’s presidency and his policies, the march’s co-chairs, Tamika Mallory and Carmen Perez, stressed that the march isn’t just about the newly elected president.

“This is not an anti-Trump protest,” Mallory said. “It’s a march on Washington not a march on Trump. All the halls of power are in Washington, D. C. and we are going there to address them all next week.” 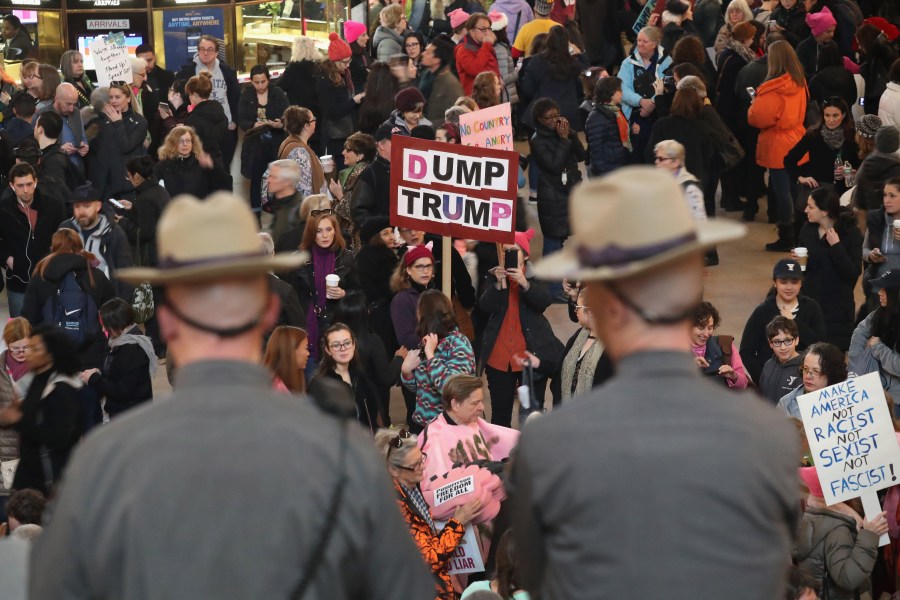 Having the march end at Trump Tower was significant. It’s the first family’s New York City home where Trump conducted nearly all of his post-election business. First lady Melania Trump and their 10-year-old son, Barron, will stay at Trump Tower until the end of the school year.

No one was arrested Saturday during the march.

The timing of the organized protest also mirrored the march suffragists made down Pennsylvania Avenue the day before Woodrow Wilson was sworn in in 1913.