MANHATTAN — A half an hour before what should have been the magical moment, hundreds lined up on 42nd street and Second Avenue.

The Tudor City overpass on 42nd near the United Nations was even more crowded As was the roadway that wraps around Grand Central Terminal.

Everyone eagerly awaiting the phenomenon that occurs when the setting sun aligns precisely with the Manhattan Street grid, creating a magical glow of lights across Manhattan’s steel canyons.

“It’s one of those magical moments in New York City,” Mort Greenberg told PIX11 as he brought his 11-year-old daughter and friend to see Manhattanhenge.

But alas the clouds covered up this magic, causing today’s Manhattanhenge to be a bust.

But New Yorkers will get another shot to see the celestial show on Saturday night, where the whole sun could be seen setting on the horizon.

Twice a year, the sunset aligns perfectly with Manhattan’s grid, sending a cascade of golden-hour sunlight spilling down cross streets.

The phenomenon gets its name from a play on the prehistoric monument Stonehenge in England, and was coined by popular astronomer Neil deGrasse Tyson. 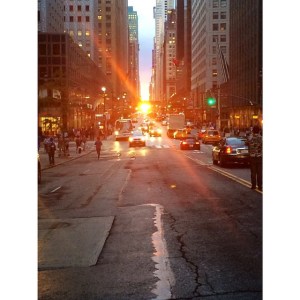 For the best view, de Grasse Tyson said to position yourself as far east as possible. Clear cross streets such as 14th, 23rd, 34th, 42nd, 57th are ideal. One of the premiere locations is the Tudor City Overpass, on East 42nd Street between Second and First avenues. Be advised that it’s a popular spot with photographers and other “Hengers,” so stake out your spot early.

As remarkable as Manhattanhenge appears to be, such “henge” events aren’t at all rare. As long as you have a straight, east-west street grid, you’ll eventually have a henge, and there are mini-henges going on all across the city throughout the year, as detailed by the NYCHenge map.

In case you miss this Manhattanhenge, fear not — you get a second chance on July 12 and 13.

Special job fair gives women a chance to change their …