FLATIRON DISTRICT, Manhattan — A Bronx man was charged Tuesday killing a young woman and injuring two of her friends when he allegedly opened fire outside a Flatiron District nightclub, hours after he posted online a photo of him and the victim along with a note saying he’s not responsible for what happened that night.

Dalone Jamison was taken into custody shortly after 11 a.m. Tuesday in Carroll Gardens, Brooklyn, along with other reputed gang members, police said. He faces charges of second-degree murder, assault and criminal possession of a weapon, officials said.

Jamison knew the victim but she was not the intended target, police said. They did not expand on who the suspect intended to shoot.

Earlier Tuesday, a police source confirmed to PIX11 News that the man posting to Instagram using the handle @smackdadyme is the same man they were looking for in connection with the fatal shooting.

“What’s goin on in his these streets smh hope lil sis ok I would loose it if not,” the user wrote in the caption of a picture showing him and the victim sitting next to each other.

The next photo, posted Monday evening, shows an expletive-laden note proclaiming the user’s innocence. It is embedded below in a censored form.

“If this is yall way of trying to make me out work harder then that make it believable d*** heads … Rest up baby girl I’m off this nasty,” the caption of that photo read. 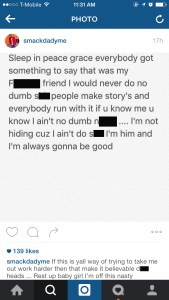 Gunfire broke out just after 4 a.m. Monday in front of Club Motivo, located at 915 Broadway in Manhattan’s Flatiron District, police said. Three women who were hailing a cab outside the club were struck, one of them fatally.

Walikque Faussett, 24, of the Bronx, was hit in the back and later died at a hospital, police said.

A passerby who was near the area at the time of the shooting described the scene as “mayhem.”

“Definitely uncommon for this part of town,” he said of the shooting.