FLATIRON DISTRICT, Manhattan — A steam pipe exploded in Manhattan Thursday morning, causing steam to shoot into the sky for hours and cover the surrounding area in thick black soot that tested positive for asbestos, authorities said.

The explosion happened at about 6:40 a.m. along Fifth Avenue between West 21st and West 22nd streets in the Flatiron District.

PIX11’s Craig Treadway, who was on scene, described the “very loud” noise coming from the explosion site as similar to that of a “jet engine.”

Multiple people suffered minor injuries, including three civilians and one police officer, FDNY Commissioner Daniel Nigro said. They were all treated at the scene for scrapes blamed on flying debris.

More than 130 firefighters responded and Con Edison worked with the FDNY to contain and isolate the explosion site.

The explosion affected one main line that connects to several feeders, which may affect air conditioners and hot water in the immediate area. There is no known impact to gas or electricity, according to Saumil Shukla, with Con Edison.

Nearby residents were initially told to shelter in place, but Con Edison and FDNY then told them to evacuate their homes, according to New York City Council Speaker Corey Johnson.

Con Edison urges anyone in the area who may have been exposed to the steam and soot to immediately bag their clothing and take a shower.

Whoever got dust or soot on their clothes, should bag the outfit and bring it to Con Edison at Broadway and 22nd Street. The utility will compensate those individuals “in an appropriate fashion,” de Blasio said.

The blast’s huge plume of steam coated blocks, buildings and vehicles in a black, soot-like substance. Firefighters were seen wiping that muck off cars, apparently in an attempt to see if anyone was trapped inside.

Some 100 FDNY members needed to be decontaminated, Nigro said.

Samples from the blast site revealed the presence of asbestos, but before the results were in, Nigro said officials were operating as if the results would come back positive.

The mayor said the air near the blast site cleared “fairly quickly,” meaning there is no “meaningful presence” of asbestos in the air.

City health officials said temporary, brief exposure to asbestos in the air is generally not cause for concern; however, repeated exposure to the fibers — such as through contaminated air conditioning and heating systems — is a concern and will be part of the cleanup efforts.

The buildings affected — 49 in all — will need to be decontaminated, a “massive undertaking” that could take days to complete, officials said.

The buildings are a mix of residential and business, the mayor said. Any residents with urgent needs, like medication or pets left inside their homes, will be assisted by FDNY and NYPD crews who will enter the buildings on their behalf and retrieve what they need, de Blasio said.

Dr. Bruce Hirsch, an infectious disease specialist at Northwell Health, echoed officials’ orders and cautioned the public to avoid the area of the blast.

“Don’t allow yourself to be exposed to high concentrations of dust irritants and possible toxins,” he said. “If you’re near, breathe through a handkerchief or cloth and monitor your breathing.”

He also advised anyone who was near the explosion site to monitor whether they develop coughing or shortness of breath.

Over the next few days, those individuals may experience irritation and coughing, according to Hirsch, whose main concern aside from possible asbestos is dirt and particulate matter in the air.

The last time New York City had a steam pipe explosion to this extent was on July 18, 2007, when an underground steam pipe burst near Grand Central Terminal during the evening rush-hour commute.

Officials said the travel delays caused by Thursday’s blast, including on streets, subways and buses, are likely to last.

The portion of Fifth Avenue near the “hot zone” and all neighboring streets are closed to pedestrians and vehicle traffic, fire officials said. That closure is expected to last into the weekend. Subways and buses were detoured as a result of the blast. For a list of transit and service changes, click here. 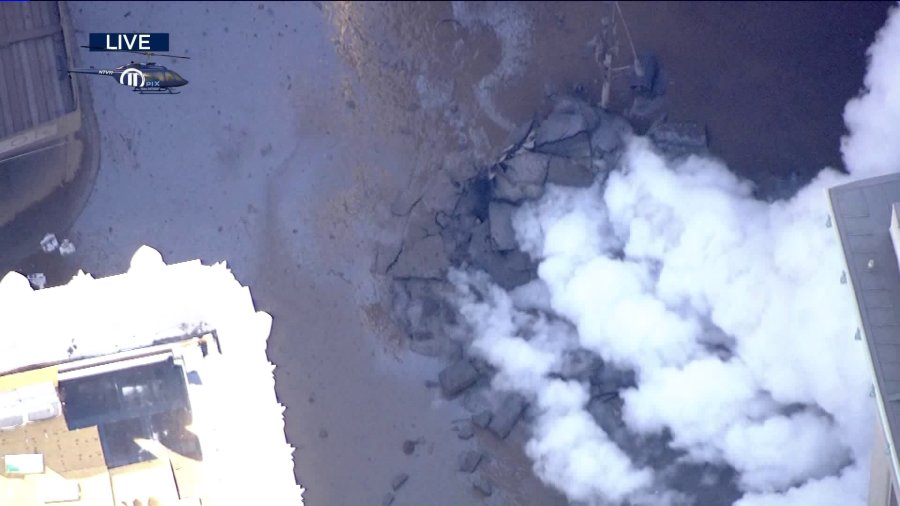