MANHATTAN — Seats on a Times Square Shuttle train are wrapped in symbols from Nazi Germany and Imperial Japan, an advertisement for Amazon’s new series “The Man in The High Castle” that has provoked a social media uproar.

A variant of the World War aII-era Japanese flag covers one side of the car while the other side is slathered with the Nazi insignia set inside an American flag. The outside of the car also features the symbols.

“The Man In The High Castle,” based on the 1962 novel, explores an alternate history in which the Axis powers win World War II. Amazon is streaming the TV series on its online service. The ad campaign was first reported by Gothamist.

The cover of the novel uses the original Imperial sun logo as well as the swastika, which the new show does not use in advertising. 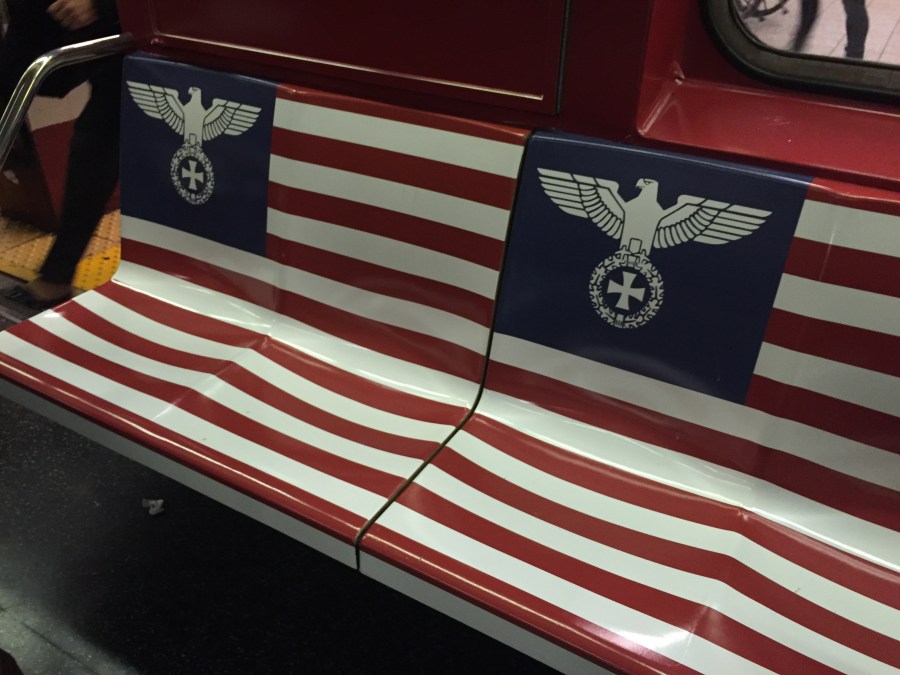 Amazon has not commented on the ad.

Straphangers at Grand Central on Monday didn’t seem to notice they had stepped into cars teeming with fascist symbols. One child even said: “This subway car is cool!” not realizing what the symbols represented.

Critics on Twitter gave Amazon a hard time over the ad campaign.

@byKatherineLam @amazon What committee did this get past in order to get made? Who looked at this and thought “Yeah that’s fine”?

This is called Bad Advertising. https://t.co/PsBWxBCMqX

Gonna go ahead and give this a clear NO. https://t.co/vfHGzPOMpN

Not everyone was piling on, of course.  One Twitter user said although the symbols are “unpleasant,” Amazon has a First Amendment right to advertise the show as it pleases.

Others commented on how great the show is.

Instead of blaming Amazon, one straphanger criticized  the MTA for accepting the ad.

“It’s not about suppressing the TV show’s right to imagine a future that is quite different than the reality of today. It’s about the MTA creating an environment that’s not propagating hate speech or hate insignia,” Ann Toback told PIX11 News.

MTA policy, adopted after a political-issue ad caused controversy, says ads should not be “created, designated or used as a public forum for expressive activities or general discourse or opinions.”

They’re limited to paid commercial advertising, public service announcements and government messages. There also is a provision that calls for maintaining a “safe and welcoming environment.”

The agency that created the ads did not return an email asking for comment.

The MTA makes about $130 million a year in advertising revenue.

The advertisement on the Shuttle began running on Nov. 15 and will stay through Dec. 14. There are posters advertising the TV series in 260 subway stations, Lisberg told Gothamist.

Greg Mocker contributed to this report.

Storms moving out just in time for Memorial Day