COLUMBUS CIRCLE, Manhattan – A man suspected of throwing a hoax device inside an NYPD vehicle at Times Square before driving away and later being located at Columbus Circle, where he remained barricaded for some six hours, was taken into custody without further incident Thursday morning, according to police.

Hector Meneses, 52, of Queens, has been identified by police as the man who remained barricaded until NYPD’s Emergency Service Unit took him into custody just before 8 a.m., police sources said.

No one was injured during the arrest, ESU tweeted.

Meneses, who has no known prior arrests and whose last occupation was as a cab driver, is undergoing a mental health evaluation at NYC Health + Hospitals/Bellevue, police said.

The overnight ordeal first began at Times Square Wednesday evening when a person inside a dark-colored SUV threw a suspicious device inside a patrol vehicle.

The incident was captured on a surveillance camera:

The officers, later described by Commissioner William Bratton as “heroes of the NYPD,” then drove the vehicle to a less crowded area and contacted the NYPD bomb squad, who determined it was inert and gave the “all-clear.”

When police approached, the man inside stated he wanted to die and had a bomb strapped to his denim-style vest, according to Manhattan Chief of Detectives William Aubry.

The man then moved his hands toward the glove compartment and put on a construction-style helmet.

Officials with the ESU and the bomb squad attempted to negotiate with the man for several hours, and achieved “limited” verbal communication.

During negotiations, the man held a remote and acted as if he could detonate an explosive, Aubry said.

Just before 8 a.m., the barricaded man was taken into custody without incident and investigators searched the vehicle.

A simulated pressure cooker made from a pot with a cap and wires was found, along with 19 LED lights, and a “fire place-type” remote control, Aubry said.

“Nothing that we know of right now comes anything close to an improvised explosive device,” he said at an 8:30 a.m. press conference.

Also during the conference, Bratton said the city’s camera and license plate systems were partly to thank for finding the suspect’s vehicle.

“The efforts of the department to build a camera system, to build a counterterrorism and crime-fighting capability in the city, in this instance reflects just how important continuing expansion of that is.”

During the six-hour standoff, several streets were closed, and trains and buses avoided the area. 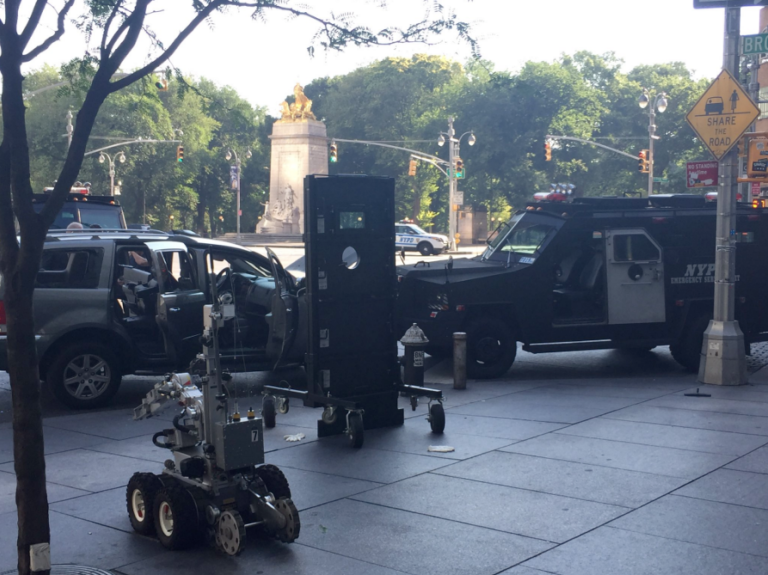