MANHATTAN — A helicopter made a crash landing onto the roof a 54-story skyscraper in midtown Manhattan on Monday afternoon, killing the pilot, who was the only person on board, sparking a fire that sent smoke billowing into the foggy sky and troubling a city still scarred by 9/11.

The pilot has been identified by American Continental Properties, the company that owns the helicopter, as Tim McCormack.

“We are mourning the loss of Tim McCormack, who has flown for us for the past five years,” a representative for American Continental told PIX11. “Our hearts are with his family and friends.”

Officials say there were no indications of terrorism, but the nature of the crash disturbed New Yorkers who feared the worst.

“There is no indication at this time that this was an act of terror, and there is no ongoing threat to New York City,” said Mayor Bill de Blasio in a news conference about the “shocking, stunning incident.” He said nobody else was injured in the building or the sidewalk below.

The crash, described as a hard landing by police, of the privately owned copter happened at 1:43 p.m. at 787 Seventh Ave., known as the AXA Equitable Building, according to NYPD and FDNY.  The blaze has been put out, but firefighters remained on the roof to contain a fuel leak from the craft.  The chopper had taken off about 10 minutes earlier from the 34th Street heliport on Manhattan’s east side.

Based on interviews the NYPD conducted at the heliport, the pilot was waiting out weather but for whatever reason decided it was OK to go, according to a law enforcement source. 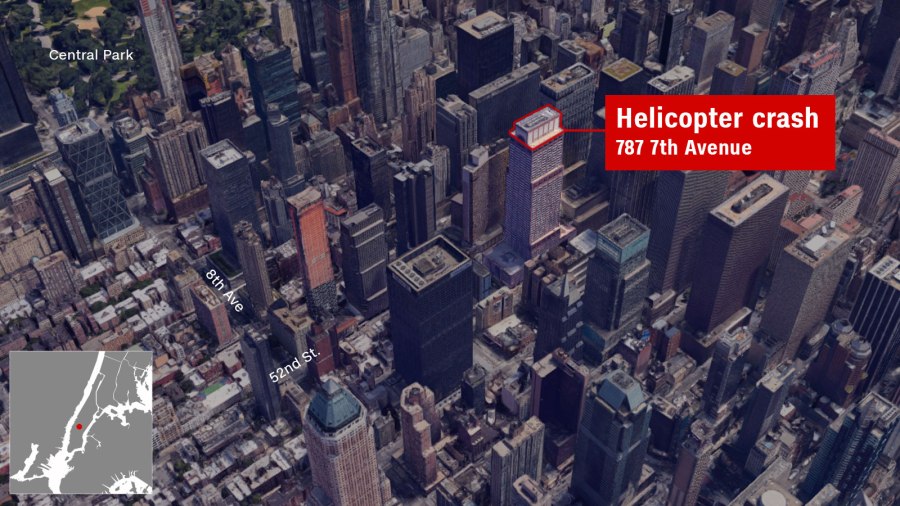 The helicopter was flying in a restricted area, cordoned off because of proximity to Trump Tower — the well-known building owned by President Donald Trump.

The chopper would have needed approval from LaGuardia Airport’s controllers to fly in the area.

It is also not known why McCormack flew on a day when chopper flights in the area were prohibited because of foul weather. According to weather rules, choppers typically fly when there is at least 3-mile visibility and ceilings of 1,000 feet. Monday’s inclement weather reduced ceilings to 500 to 800 feet, and visibility was only 1/2 a mile.

Amateur video shows the chopper flying low and wobbly before disappearing into the fog.  After leaving the heliport, the pilot then flew around Battery Park on the southern tip of Manhattan and up the west side of the island. Somewhere between 40th and 49th streets, the pilot began to veer towards midtown Manhattan before the helicopter ultimately made the crash landing.

A woman who works in the AXA tower tells PIX11 it shook when the helicopter landed.

A man in the area tweeted that he heard a loud sound. He later shared video of smoke billowing from the skyscraper.

“I looked up and saw sheet of flame on roof and then smoke,” Lance Koonce tweeted.

787 7th ave, #midtown NYC. We’re 1 block south. 20 mins ago there was a loud sound like a too-low #helicopter & I looked up and saw sheet of flame on roof and then smoke.News reports saying helicopter/small plane crash onto roof which would be consistent with what I heard/saw. pic.twitter.com/swY3ksLskH

Although fire was reported after the crash, FDNY officials said fuel leaked from the chopper, and images from the scene showed debris fell from the roof of the 54-floor building, no injuries have been reported.

Pedestrian and vehicular traffic was for  time  banned between West 42nd and 57th streets, between Eighth Avenue and Sixth avenues. However, subway service was not impacted.

Here is a picture of debris that fell onto a Midtown Street after a helicopter crash landed on top of a 7th Avenue building @PIX11News #NewYork #Midtown pic.twitter.com/c22Gx5GGzM

Initial reports from authorities that it was a plane, not a helicopter  — and the sight of smoke billowing from a 750-foot tall tower in the heart of New York City — caused minutes of widespread alarm in a city where the trauma of 9/11 is forever in people’s thoughts.

His mind “goes where every New Yorker’s mind goes” when he hears news of a plane or helicopter hitting a building, he said.

“If you’re a New Yorker, you have a level of PTSD from 9/11. And I remember that morning all too well. So as soon as you hear an aircraft hit a building, my mind goes where every New Yorker’s mind goes”

It appears the helicopter made a hard, forced landing on the building’s roof, leaving no immediate signs of damage to its structure — although dense fog is obstructing much of the view.

The helicopter that crashed was an Agusta A109E.

President Donald Trump tweeted that his administration stands at the ready to help. He has communicated with Cuomo and offered any help that was needed.

“I have been briefed on the helicopter crash in New York City. Phenomenal job by our GREAT First Responders who are currently on the scene. THANK YOU for all you do 24/7/365! The Trump Administration stands ready should you need anything at all,” he tweeted.

Just outside my building. The helicopter crash in NYC. You can the FDNY/NYPD out in force. Very foggy at top of building where chopper crashed. pic.twitter.com/vm7sAA1qKw

The building is owned by CalPERS, the California Public Employees Retirement System.

“We are aware of the helicopter crash in New York City involving a building in our real estate portfolio. First responders are on scene. We are monitoring the situation and will continue to communicate with our manager, CommonWealth Partners, and their on-site staff,” CalPERS said in a statement.