NEW YORK — The city’s police union is asking its officers to take photos of transients who sleep on sidewalks and in parks, panhandlers asking passersby for change, and other “quality of life offenses” in the five boroughs with the intent of publishing those pictures online, according to a memo obtained by PIX11 News.

“As you travel about the City of New York, please utilize your smart phones to photograph the homeless lying in our streets, aggressive panhandlers, people urinating in public or engaging in open-air drug activity, and quality of life offenses of every type,” the memo sent Monday from Sergeants Benevolent Association President Ed Mullins reads.

He reminded law enforcement they are not allowed to take pictures of the public while on duty but urged them to do so when they are traveling to and from work or whenever they’re walking around the city. The union represents about 12,000 active and retired NYPD sergeants. 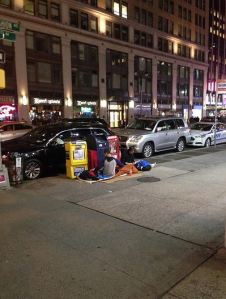 “All photos will be posted on the Peek-A-Boo page on our website and our sergeants will notify our public officials in writing of what is being observed,” Mullins wrote. “We will refer issues to the proper agencies, and we will help create accountability equally across the board.”

By midday Monday, the union posted 17 pictures in its Flickr album titled “Peek-A-Boo.” One shows a man sleeping on top of pizza boxes outside a park. Several pictures show men and women sitting on the sidewalk next to illegible signs, presumably that plead with readers for money.

“I see New York City deteriorating,” Mullins told PIX11 News. “I see quality-of-life crimes all over the city, homeless all in our streets. A national problem between people of color and the police and all I see are phony politicians introducing phony legislation that accomplishes nothing.”

The initiative was announced in a memo slamming the city’s “inept and spineless public officials who sit amongst the City Council and propose legislation that can only be described as preposterously disingenuous.”

Among that legislation is the Right to Know Act, which would require officers to identify themselves to those they stop and obtain verbal or written consent before searching an individual if no warrant or probable cause exists.

Mayor Bill de Blasio’s office released a statement about the union’s directive, saying the city’s officers will continue to enforce the contested so-called broken windows policy, meant to crack down on small crimes under the theory that such policing cuts down on more serious offenses.

“From adding $1 billion for homeless services to investing heavily in broken windows policing, Mayor de Blasio is clearly committed to keeping all of our streets and neighborhoods safe,” the statement read. “The NYPD will continue to enforce the law against quality-of-life offenses and ensure we keep New York City the safest big city in America.”

The head of the oldest and largest provider of healthcare exclusively to the homeless, Care for the Homeless, said taking pictures of the homeless and posting them to social media could be a positive move.

“I don’t take a position on the letter or motivation. I really focus on results,” Bobby Watts, executive director of Care for the Homeless, told PIX11 News. “To the extent that more people are aware of homelessness and are determined to find solutions, that can be helpful.”

Photos and a note about where they were taken can be sent to PEEKABOO@SBANYC.ORG.

NYPD says hate crimes are on the rise