TRIBECA, Manhattan — A man described as a “lone wolf” deliberately drove a rented truck into a West Side bike path in lower Manhattan, killing at least eight people and injuring 11 others in the first terror attack in New York City since 9/11, and just blocks from the World Trade Center.

A high-ranking police source tells PIX11 News the suspect has been identified as 29-year-old Sayfullo Saipov. He’s a resident of Tampa, Fla., who arrived in the United States in 2010 from Uzbekistan, sources tell PIX11 News.

Saipov was brandishing two fake guns when he exited the truck after the multi-block rampage which left a trail of mangled bodies and twisted bikes. He yelled “Allahu Akbar,” which is Arabic for God is great.

No other suspects are being sought in the investigation.

The victims were hit by a rented Home Depot truck around Hudson Street and Chambers Street shortly after 3 p.m. The driver entered the West Side Highway pedestrian/bike path a few blocks north of Chambers Street, striking multiple people along the path — some of who were on bicycles.

The dead include citizens of Argentina, AP reports.  Three Belgians were also injured, the consulate announced on Twitter.

Eugene Duffy, a chef, was on his way home from work when the chaos erupted. He could hear the screams of terrified pedestrians.

“I see two gentleman lying right there in the bike lane with tire marks across the body and you can tell that they’re not here no more,” Duffy said. “And you hear the ladies screaming. That’s what made me go back that way and look.”

At Chambers Street, after barreling along the bike path for the equivalent of about 14 blocks,  the truck collided with a school bus, injuring two adults and two children. After the collision, the driver exited the truck holding a paintball gun and pellet gun.

Pedestrians scattered from the scene. John Williams was walking in the area and didn’t know anything was happening until he saw two women and children running toward him.

“I turned around to get away, but about 30 seconds to a minute later, I heard gunshots,” Williams said.

A police officer confronted the suspect and shot him in the abdomen. He was taken into custody.

The incident happened near both Stuyvesant High School and Borough of Manhattan Community College, several blocks north of the World Trade Center. Many students and tourists were in the area.

“They were scared,” said one student at Borough of Manhattan Community College. “They were scared about it because that’s something weird happening in front of the World Trade Center. This is something shocking for us to see in New York.” 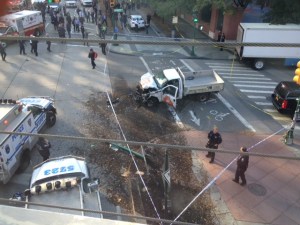 President Donald Trump, a native of New York, was briefed on the situation by White House chief of staff John Kelly. He responded to the incident in a tweet at 5:30 p.m.

In NYC, looks like another attack by a very sick and deranged person. Law enforcement is following this closely. NOT IN THE U.S.A.!

“Our thoughts and prayers are with all those affected,” White House spokeswoman Sarah Huckabee Sanders ​said.

The president tweeted: “In NYC, looks like another attack by a very sick and deranged person. Law enforcement is following this closely. NOT IN THE U.S.A.!​”

A Home Depot confirmed one of the company’s rental trucks from New Jersey was part of an incident in lower Manhattan and said the company is “cooperating with authorities” in the investigation, CNN reported.

The attack happened on Halloween, as the city ramped up for celebrations big and small, including the annual Greenwich Village parade, which went on under enhanced security.

Brooklyn man nabbed for hitting LI cop with his car

Brooklyn man nabbed for hitting LI cop with his car

NY-10: Where candidates stand ahead of election

Debate recap: Where candidates for NY-10 stand on …

Moose on the Loose: Yankees are not this bad

Child falls from apartment building in the Bronx

Yet another water pipe bursts in Newark, prompting …

NY-10: Where candidates stand ahead of election

Yet another water pipe bursts in Newark

Yet another water pipe bursts in Newark