MANHATTAN — A man fatally shot the supervisor who fired him days prior, then killed himself at a construction site in Manhattan early Thursday, according to police.

An active shooter was reported near West 59th Street between 11th and 12th avenues, bordering the Upper West Side and Hell’s Kitchen, at about 7 a.m., police said.

A foreman, who is in charge of the construction crew, was found dead with several gunshot wounds on the 37th floor of the building, police said. He was later identified by sources as Chris Sayers, 37.

It was quickly determined an active shooter situation was not underway, and police secured the area as they searched for the gunman, officers said.

Police barricaded some construction workers on the 39th floor, and cordoned off others during the search.

The suspected gunman was found dead of an apparent self-inflicted gunshot wound at about 8:45 a.m. on the fifth floor of the building, police said. A 9 mm semi-automatic was recovered nearby.

The suspected shooter was known as a “bit of a hot head” and was fired by the foreman two days prior, NYPD Deputy Chief Christopher J. McCormack said.

“It was regarding respect of himself and the workers,” McCormack said of the firing.

The accused was arrested three times prior, twice for assault and once for burglary, with the most recent arrest occurring in 2005, according to McCormack.

An investigation is underway into how he was able to access the building after being fired, police said.

A co-worker, Robert Pagan, said a dispute occurred days ago between the suspect and victim.

“They had words two days before … over, just, work. He did something wrong, he felt upset and he (the suspected gunman) got yelled at,” the co-worker said, noting the altercation was over a “fireable offense.”

Pagan said he saw the suspected gunman inside the building under construction at about 7 a.m.

The alleged shooter was “very calm” as he walked downstairs, the co-worker said. The two then exchanged pleasantries, hugged, and the accused gunman continued walking downstairs as Pagan walked up.

When Pagan arrived at the 37th floor, he said he found the foreman’s body, with at least one gunshot wound to his face. 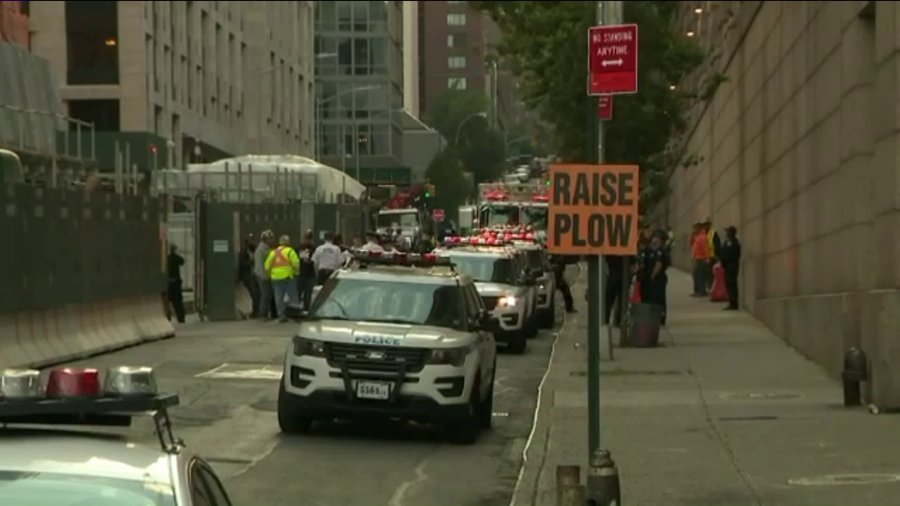 Almost immediately after the deadly altercation, a man on scene posted to social media the words “jobsite shooting” along with video of police responding to a construction site.

Construction workers gathered behind police tape as officers searched the area, and were later told to go home for the day.

Below watch AIR11 footage of the scene: