NEW YORK — Terror group ISIS released a propaganda video Wednesday that makes threats against New York, but city leaders said there is no “credible and specific threat” to the city.

In a news conference Thursday, Mayor Bill de Blasio said the threats are “not new material” and a “blatant” attempt to intimidate New Yorkers while the world was still reeling from a series of terror attacks in Paris.

He added that NYPD is prepared to respond to up to 24 incidents simultaneously, “if, God forbid, that day came.”

The night before, de Blasio along with NYPD Commissioner Bill Bratton addressed the video during a news conference in Times Square.

“We understand it is the goal of terrorists to intimidate and disrupt our democratic society,” de Blasio said. “We will not submit. It’s crucial that people go about their normal business recognizing the NYPD is providing extraordinary protection for the people of this city.”

He reminded New Yorkers to alert authorities if they see something suspicious.

Bratton said there’s nothing “new” about the video that appears to be produced with a mishmash of scenes from other previously released ISIS videos.

“No city is better prepared to protect against terrorist attack,” Bratton said. “The NYPD will protect you. We will not be intimidated and we will not live in fear.”

The NYPD boss said they will be ready as thousands partake in different holiday celebrations across the city such as the Thanksgiving Parade and lighting of the Christmas Tree in Rockefeller Center.

The NYPD released an earlier statement regarding the video.

“We are aware of the newly-released ISIS video that mentions Times Square. While some of the video footage is not new, the video reaffirms the message that New York City remains a top terrorist target.”

Police reaffirmed there are no threats to the city at this time but will remain at a “heightened state of vigilance.”

“In addition, we are continuing to deploy additional Critical Response Command (CRC) teams throughout the City, out of an abundance of caution.” 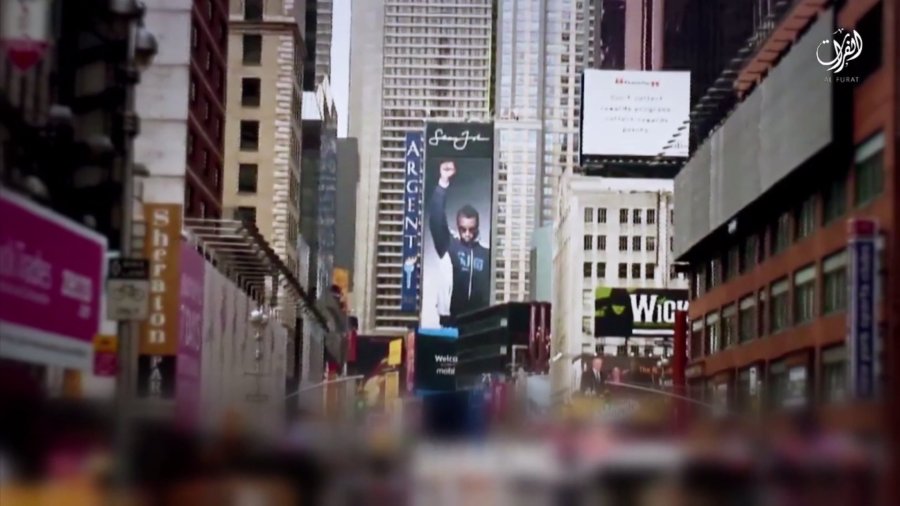 de Blasio released an earlier statement regarding the video as well:

“Stoking fear is the goal of terrorist organizations, but New York City will not be intimidated. The NYPD is the most capable police force in the country, with a robust counterterrorism operation that was just strengthened with an investment of 500 additional officers. While Times Square and Herald Square appear in the video, the NYPD in conjunction with all of our partners are taking all necessary security precautions in these areas and areas across the City. New Yorkers won’t live in fear and people should continue to go to work, live their lives, and enjoy the greatest city in the world.”

None of the threats in the video are news to the NYPD. The department has routinely braced for an attack against these and other high value targets for more than a decade — dating back to the 9/11 attacks.

“They have their objectives — they need to resonate, and they need to recruit people. And they recruit them by sending a message through their targets. So if they chose Ohio, and an empty parking lot, no one would really care,” Halpern said.

Another example of that straightforward, but deadly approach to terror — a Schweppes Pineapple flavor can of soda, and just two other components — used to make a bomb.

An ISIS online magazine, published the photo, with the poster commenting this was the precise device that brought down a Russian jetliner last month over Egypt, killing more than 200 people.

Retired US Navy Captain John Cochrane says it only takes a couple of ounces of explosives to do major damage to an airplane.

“The terrorists will use anything to get a small amount of explosive onto a plane,” Halpern said. ” Because that’s all it takes to really do some serious damage to the airframe, is an explosion inside, because the cabin is pressurized. If the person knows how to make – if a terrorist knows how to make a shape charge, when it explodes, to go forward and cause that explosive, to move in a single direction, you don’t’ need a big massive bomb or a missile to take down an aircraft.”

On Monday the terror group released a video saying countries who participated in the airstrikes against Syria would suffer the same fate as France.

“We say to the states that take part in the crusader campaign that, by God, you will have a day, God willing, like France’s and by God, as we struck France in the center of its abode in Paris, then we swear that we will strike America at its center in Washington,” said one of the men in Monday’s video.

This year, 49 alleged ISIS supporters were charged with related crimes in the United States.