WEST SIDE, Manhattan — The MTA opened the new 34th Street-Hudson Yards 7 station Sunday that introduces subway service to the West Side of midtown Manhattan

Normal service at the station started at 1 p.m.

The station makes the 7 the only line south of 59th Street to provide service west of Ninth Avenue, offering access to the Jacob Javits Convention Center, the High Line and the newly opened Hudson River Park.

The primary entrance will be at West 34th Street and Hudson Boulevard East.

A secondary entrance is currently under construction at West 35th Street and Hudson Boulevard East.

“The station is expected to serve more than 32,000 entries and exits on weekdays when it opens and is designed to handle as many as 25,000 during a peak hour.
This station is the centerpiece of an ambitious plan to make the far West Side of Manhattan a top-tier destination for residents and visitors alike while meeting the daily needs of millions of subway riders, and one that is poised to meet future needs,” Governor Andrew M. Cuomo said. “It is a clear example of how the City and State can work together to support a transit network that drives our regional economy.”

“This is a great day, years in the making,” Mayor de Blasio said. “It’s an expression of this city’s capacity to do big things. The 7 train extension is going to anchor new growth and opportunity on the West Side, and will improve the commutes of tens of thousands of New Yorkers. And the new public space opening above is a tremendous addition to the cityscape. We are deeply appreciative of the contributions so many New Yorkers and organizations have made to this project — from Mayor Michael Bloomberg, to the MTA, to Senator Schumer and our local elected officials.”

“Just as the 7 train created neighborhoods like Long Island City, Sunnyside, and Jackson Heights in the 20th Century, this extension instantly creates an accessible new neighborhood right here in Manhattan,” Chairman Prendergast said. “It will improve service reliability for all 7 line customers, and thanks to the foresight of Mayor Bloomberg, it is anchoring the transit-oriented, mixed-use development transforming the far West Side.” 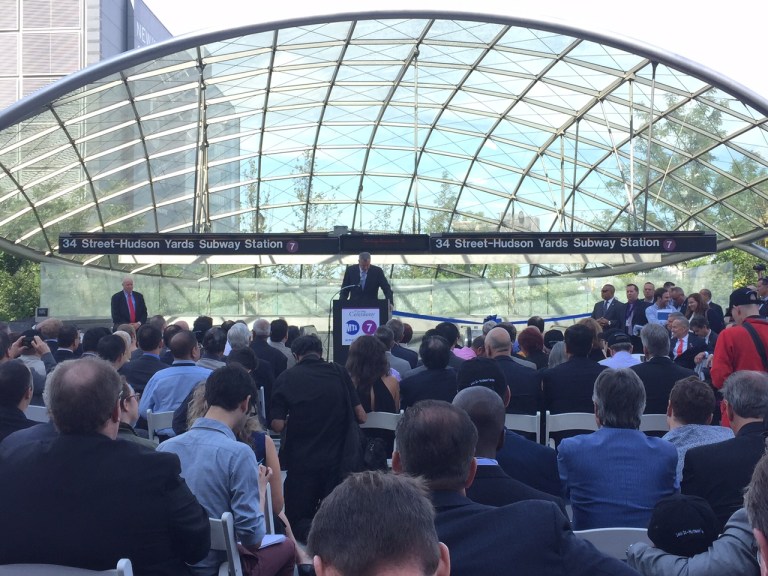 Normal weekday service has trains departing 34 St-Hudson Yards every 5 minutes or less (minimum during rush hours is every 2½ minutes) from 6 a.m. to 11 p.m., every 6½ minutes until midnight, every 12 minutes until 1 a.m., every 15 minutes until 2 a.m., and every 20 minutes overnight.