MORNINGSIDE HEIGHTS, Manhattan — Police are looking for a group of male individuals accused of assaulting a delivery man before stealing his bicycle in Upper Manhattan earlier in November.

Just after midnight on Friday, Nov. 1, a delivery man was riding his bike on 111th Street, near Amsterdam Avenue in Morningside Heights, when one of the unidentified individuals, riding a Citi Bike, deliberately cut him off, police said.

Two other individuals surrounded the delivery man and then one of them struck him in the head with an umbrella, according to authorities.

Upon being hit, the victim fled the scene on foot. When he returned to the scene a short time later, he discovered his bicycle had been stolen, officials said. He was not seriously injured as a result of the incident.

Police said the three individuals fled with a group of several others in an unknown direction.

The NYPD has released the below photos of the group. 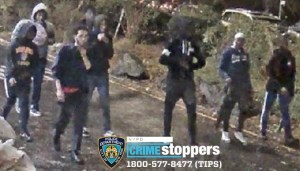 Cloudy, breezy afternoon to be followed by evening …