CHELSEA, Manhattan — An explosion during a bustling night in NYC’s Chelsea neighborhood Saturday that resulted in 29 people being injured was “obviously an act of terrorism” although no links to international groups has been discovered, Gov. Andrew Cuomo said of investigator’s findings the day after the attack.

Twenty-nine people were hospitalized overnight and released by Sunday afternoon due to an explosion around 8:30 p.m. Saturday in front of 135 W. 23rd St. between Sixth and Seventh avenues.  None of those hospitalized sustained serious injuries, and the worst was described by FDNY as a puncture wound.

Components “indicative of an improvised explosive device (IED)” were discovered at the Chelsea blast site, leading Police Commissioner James O’Neill to say “we definitely had a bombing.”

The explosion caused “significant damage” to buildings, making it all the more remarkable that nobody was killed, Cuomo said.

The bombing was one of four eerily similar incidents to hit the tri-state area on Saturday. The first being a pipe-bomb explosion in the morning hours in Seaside Park, N.J. that resulted in no injuries, and later the discovery of two suspicious devices in Manhattan following the Chelsea explosion.

Cellphones were used to detonate the Seaside Park and two NYC devices, CNN reports, but investigators have not concluded the incidents are connected.

In addition to facing multiple complex and fluid situations, sources Sunday said an online manifesto by an individual claiming responsibility for the attack had been determined not to be credible.

Authorities maintain they are still investigating who is responsible and why he or she did it.

“Right now we don’t have enough information to make any final conclusion. As the mayor said, we don’t know if there’s any political or social motivation, but we definitely had a bombing last night,” O’Neill said.

A “complex” investigation is being conducted by the NYPD, ATF, JTTF, the state police and FBI, O’Neill said. Any witnesses with photos, videos or information are urged to call the NYPD.

O’Neill — whose first full day on the job was Saturday following the resignation of Bill Bratton — said the NYPD has a video of the explosion and is collecting more, but would not discuss additional details of the investigation.

We do think this was an intentional act. You can help your #NYPD. If you saw/heard something, please call 800-577-TIPS and/or 888-NYC-SAFE.

The Chelsea explosion was “obviously an act of terrorism,” Cuomo said Sunday, but it is not known to be linked to any international groups and no group has come forward to claim responsibility.

Following the release of all those injured from the hospital, a sense of relief that no one was killed is starting to set across NYC. However, officials are taking steps to increase security in the city.

“As the governor of New York, this is my worst nightmare,” Cuomo said. “My worst nightmare is the phone rings late at night and there’s some terrorist attack, emergency flood. … This is the nightmare scenario.”

As New Yorkers prepare to start the work week, 1,000 state police and National Guard will be deployed as an extra precaution, and security has been stepped up throughout the five boroughs as Sunday events take place.

In addition, officials will increase the number of bag checks conducted in subway stations.

“Although there is no known imminent threats to Nassau County, police are monitoring these attacks along with federal, state and local authorities,” a statement from officials read. “Nassau County police are intensifying patrols in all areas of mass transit, critical infrastructure and will increase patrols at significant public events.”

Hours before violence broke out in Chelsea, a pipe bomb placed in a garbage can exploded near the Seaside Park Semper Fi 5K Charity Run route. No one was injured in the Seaside Park explosion.

A secondary device — a pressure cooker with dark-colored wiring protruding, connected by silver duct tape to what appears to be a cellphone —  was safely removed from West 27th Street between Sixth and Seventh avenues early Sunday by the NYPD Bomb Squad. The device was initially found by New York State police troopers responding to the scene.

The NYPD and FBI Bomb Technicians rendered the device safe. The device was taken to the secure NYPD Bomb Squad facility at Rodman’s Neck Range in the Bronx, and is later expected to be shipped to the FBI lab in Quantico, Va. for analysis.

A pressure-cooker device was found on Sept. 18, 2016, four blocks from where an explosion in Chelsea injured 29 people. The devise was safely removed by the NYPD Bomb Squad. (CNN)

A third suspicious package was reported at 28th Street and Fifth Avenue but has been cleared. The package, a briefcase, was determined to be a piece of garbage, according to NYPD Assistant Commissioner for Communication and Public Information J. Peter Donald. 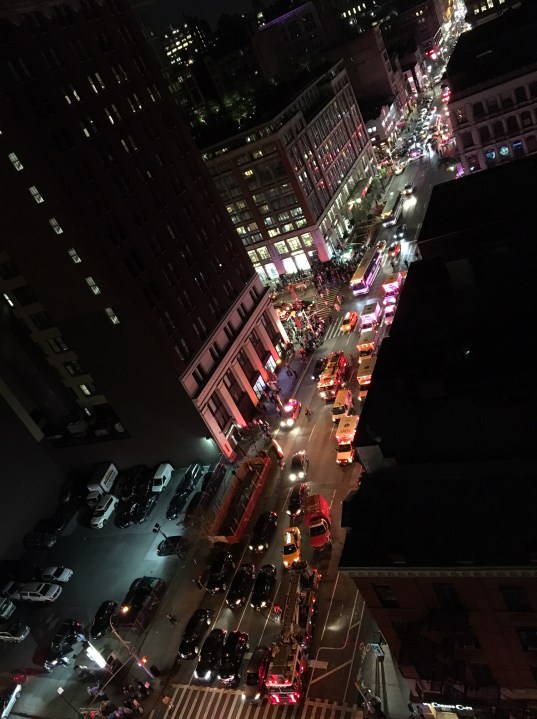 The White House has issued a statement regarding the explosion.

“The president has been apprised of the explosion in New York City, the cause of which remains under investigation. The president will be updated as additional information becomes available.”

The Chelsea bombing happened in front of Selis Manor, an apartment building that assists the blind community, and photos posted to social media immediately after show hundreds of people standing in the streets trying to figure out what happened.

“The building shook, it was a huge, intense explosion,” said Teigman. “I saw people running west on 23rd Street.”

Others agreed they could feel the vibrations from the outdoor explosion.

“I was eating dinner and felt the vibrations of the blast,” said Yemi Osibogun, a Bronx resident who was seated at a nearby sushi restaurant. “My plate actually shook.”

And many more described the scene as chaotic.

“It was loud. It was very loud,” said Crown Heights resident Fredrick Farrell. “I was on 21st Street and the blast sounded like it was right next door.”

As people across the country learned of the attack and sought to contact loved ones in NYC to make sure they were OK, Facebook activated its safety check feature, allowing users nearby the explosion to tag their safety.

The NYPD Counterterrorism Unit asked New Yorkers to remain vigilant and aware of their surroundings, and officials reminded commuters to continually check which stops subways are bypassing and what street closures are still in effect.

“You have the finest police agencies in the world when it comes to New York. … We will not allow these type of people and these type of threats to disrupt our life in New York. That’s what they want to do, we’re not going to let them do it,” Cuomo said. “Whoever placed these bombs, we will find and they will be brought to justice. Period.”

Among those in the community reaching out to help victims is The Standard High Line hotel, which is offering free rooms and dinner to people displaced by the explosion.