HARLEM (PIX11) — Asabi Barner was a confident woman in her 30s. Her body was never something she felt a need to cover up, until now.

A tattoo coverup changed her life last year. Barner says she desperately wanted to replace a unicorn and horseshoe tattoo she got when she was only 18, but now regrets that decision.

Barner decided to go to Black Ink, a tattoo parlor in Harlem that has its own reality show on VH1, a massive following and is even a spot frequented by many celebrities.  But Barner says the main reason she picked them is because they claim to be the best of the best when it comes to tattooing on African American skin.

A massive chestpiece, she says, left her disfigured. 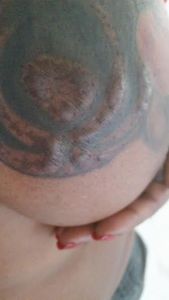 While the tattoo was in Barner’s words “phenomenal” at first, the next morning the area surrounding her left breast started to ooze with pus. Barner consulted with another tattoo artist in South Carolina, where she lives. The artist there said her skin was “overworked” in an attempt to bring out a white color for her tattoo and now more than a year later, Barner is still in pain.

Her skin has keloids, is raised, and burns and itches to a point she can only have relief by applying an ice pack every single day. Even a consultation with a plastic surgeon brought no hope, the doctor telling her surgery would only make her scar worse.

“In the intimate moments it creates a problem because you don’t have that confidence. I wasn’t overly confident before, but I felt good about myself. Felt good about my body, but it just changes you,” said Barner.

Many questions about why Asabi Barner chose to get the cover-up tattoo she did.  Barner told PIX11 the fruits and vegetables represent her new venture into the culinary world as a student in culinary school.

PIX11 attempted to reach Black Ink numerous times, but never was able to reach anyone for comment. The voicemail for the shop was full and gates were closed when our crews stopped by.