MANHATTAN — Multiple people are hurt, including a suspected bomber who is in custody, after a pipe bomb exploded in what’s being called an attempted terrorist attack in a subway tunnel beneath the Port Authority Bus Terminal on Monday.

The explosion created “a lot of chaos” as commuters fled from the usually bustling transit hub at the height of the morning commute.

The blast occurred about 7:20 a.m. near West 42th Street and Eighth Avenue, police said. It happened in a below-ground walkway that connects the Times Square shuttle and the Nos. 1, 2 and 3 subway line.

“This was an attempted terrorist attack,” Mayor Bill de Blasio said. “Thank God the perpetrator did not achieve his ultimate goals.”

Akayed Ullah, 27, has been identified by Police Commissioner James O’Neill as the suspected bomber. He is believed to have strapped a “low-tech” device to his body using Velcro and zip ties.

When asked if the suspect claimed to be connected with ISIS, the NYPD commissioner said Ullah “made statements” but would not confirm whether the bombing is linked to the terror group.

Three people who were in the immediate area of the explosion suffered minor injuries, such as headaches and ringing in their ears, officials said.

The scene of a pipe bomb blast beneath the Port Authority Bus Terminal has been cordoned off on Dec. 11, 2017.

The blast wreaked havoc on the commute, snarling the ride for customers using subways and buses in New York and New Jersey.

“Let’s be clear, as New Yorkers, our lives revolve around the subways,” de Blasio said. “An attack on the subway is incredibly unsettling.”

For hours after the blast, trains bypassed Port Authority Bus Terminal and Times Square. MTA Chairman Joe Lhota said lines were “totally up to speed” about two hours after the explosion.

Immediately after the explosion, the A, C and E subway lines were evacuated, and the Port Authority Bus Terminal was temporarily closed. It reopened about 9:30 a.m. 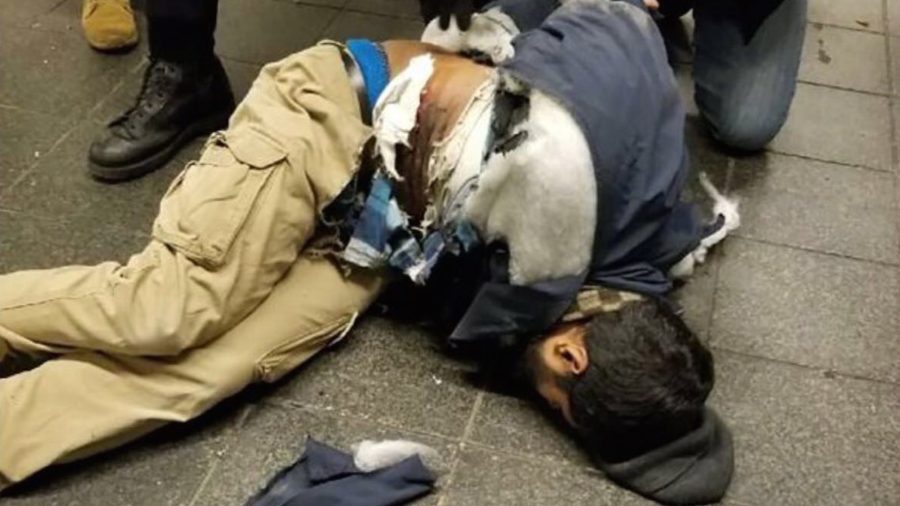 A subway bombing is “in many ways, one of our worst nightmares,”  Gov. Andrew Cuomo said, noting the damage and number of injuries or deaths could have been much worse.

“The reality is that we are a target by many who would like to make a statement against democracy, against freedom,” Cuomo said. “We will go forward, and we will go forward together. Service will resume. Let’s go back to work. We’re not going to allow them disrupt us. That’s exactly what they want, and that is exactly what they’re not going to get.”

Video of the incident shows dozens of commuters in the underground walkway when the explosion occurred. People immediately cleared the area, covering their heads as they ran from the blast.

This is video of the terror suspect, the moment the pipe bomb strapped to his body detonated underground at 42nd St and 8 Ave passageway. 3 minor injuries reported besides 27 year old suspect. @PIX11News pic.twitter.com/FvNz3T5reI

A witness said he heard two explosions as he was exiting a bus at about 7:45 a.m.

“From what I saw it sounded like it came from the subway, but I’m just guessing,” Francisco Ramirez told CNN. “It was two distinct explosions seconds from each other. As I was making my way toward the outside, I kept getting shoved by cops and there were cops at every entrance blocking and there was police and SWAT everywhere.”

Ramirez said he distinctly heard the blasts although he was wearing headphones.

“It was scary. It was just a lot of chaos, but I didn’t see any injuries.”

If you have any information about Ullah or the explosion, investigators ask that you call the Terror Hotline at 888-NYC-SAFE. Anyone attempting to reach someone who may have been impacted by the incident should call 311, according to NYC’s Office of Emergency Management.

The NYPD is responding to reports of an explosion of unknown origin at 42nd Street and 8th Ave, #Manhattan. The A, C and E line are being evacuated at this time. Info is preliminary, more when available. pic.twitter.com/7vpNT97iLC