The mayor says the explosion appears to have been related to plumbing and gas work at 121 Second Ave. There are no reports of any missing people.

Con Ed was at the building at 2 p.m., an hour before the explosion, to inspect work being done there — that work was found to be “unacceptable.”  Con Ed President Craig Ivey, quoted by the AP,  says the crews were there to evaluate a planned installation of a second meter in a now-collapsed building where construction was going on Thursday. He says the meter didn’t pass the inspection, meaning it wasn’t ready for gas to be introduced, AP reported.

The massive blast tore through a five-story building at 121 E. 2nd Ave. between 7th Street and St. Marks Place, igniting the structure and three adjacent building — 119, 123, and 125 —  as the flames tore through the roof.  The fire completely gutted the residential building with the Japanese restaurant Sushi Park on the first floor, leaving only the brick exterior as the floors collapsed on top of each other into a heap of rubble.

Some 250 firefighters are on the scene. The call for the blaze came in at 3:17p.m., and firefighters were there in  less than three minutes, according Fire Commissioner Daniel Nigro.

CHAOS IN THE AFTERMATH OF EXPLOSION

People can be seen frantically running out of the Sushi Park restaurant at 121 Second Ave. and East 7th Street. The restaurant shared the five-story building with apartments on the upper floors.

“What happened? Oh my God!” a woman can be heard yelling.

Bystanders rush to the aid of a man laying in the rubble, who appears to have been blown out of the building.

Around the same time, a screaming woman found herself trapped on a fire escape, her rescue coming from a man who climbed up to her on a ladder shortly below thick smoke began to billow from the doomed building.

The woman was struggling to get down as concerned pedestrians scrambled to try to help her. A man then climbed up a ladder leading to the fire escape, extended his hand, and helped the woman down to the sidewalk to safety.

A NEIGHBORHOOD LEFT IN SHOCK

The manager of Dallas BBQ, Ataur Rahman, told PIX11 was scared when he heard the explosion.

“I was inside when I heard the BOOM so I got a little scared,” Rahman said. “Then I thought maybe a car from the street banged into my restaurant. But I looked outside and debris was coming out. People were running and the storefront was on the street. I saw blood on people’s arms.”

Another witness said that shortly following the blast a bleeding man was seen lying unconscious in the street in front of the building, and several people wearing kitchen-style aprons — some with visible injuries — could be seen trying to pull people to safety.

A woman walking to a nearby Starbucks described the scene, “I was walking down 9th Street toward 2nd Avenue when I felt the ground shake.”

“We heard a loud explosion,” recalled the owner of a nearby store.  “It felt like a bomb blast or something, it was really loud.”

A relocation center has been established for displaced residents at P.S. 63. Officials urge residents to be mindful of hazards from smoke in the air, and to keep windows closed. Residents are urged to call 911 if they smell any gas.

Gas has been shut down in the area.  The building is located close to NYU and in a neighborhood bustling with bars and restaurants.  The popular Pommes Frites Belgian french fry eatery is located next door. 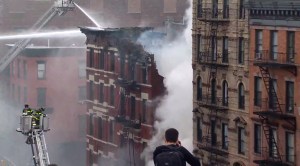 The mood was somber around East 7th Street. The thick grey smoke was overwhelming traffic, both pedestrian and vehicular. Police were giving out blue surgical face masks to people standing about. Many of those milling about were young students — the collapsed building shares a block with one of NYU’s dorms. Only two blocks away, there is an NYU lecture hall and another dorm. West towards 4th Avenue are two Cooper Union buildings.

Donna Parker, professor for NYU’s Steinhardt School, was teaching nearby when the explosion happened. “I was lecturing, when our class heard an explosion — it was like “Boom! Boom!” It wasn’t like a gun shot — it was longer. None of us felt it, but we looked at each other after that strange noise.”​

The blast was an eerie reminder of last year’s gas-fueled explosion in East Harlem that left eight people dead and dozens injured. The two buildings were wiped out by the blast linked to a main that was more than 100 years old, though the official cause has not yet been determined by federal investigators. 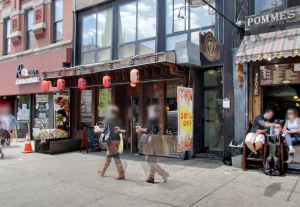 There was justan explosion on 2nd avenue and 7th street east village pic.twitter.com/jvSbfdCSSe

This is a developing story; refresh page for updates.

Police arrest 2, continue search for others in NYC …

Graham McTavish takes us inside “House of Dragons”