LOWER MANHATTAN —  A massive crane that was being lowered as a safety precaution because of high winds ended up collapsing onto a narrow TriBeCa street Friday morning, killing one person who was walking by and injuring three others.

The first report of the fallen crane on Worth Street came in at 8:24 a.m. The collapse happened at the height of the snowy morning commute in lower Manhattan. The 565-foot-long, 330-ton crane also damaged four buildings, including the New York Law School building, as it came crashing down.

David Wichs, 38, of the Upper West Side, was walking down Worth Street when the crane killed him. Three others were injured by the falling debris.

The collapse was caught on video by an electrician, Glenn Zito, who was on an upper floor of a nearby building and happened to be filming the lowering of the crane when it suddenly crashed onto the street with a loud, sickening thud. (Video is directly below.)

“I was walking my children to school when we heard a noise, it sounded like an earthquake,” a neighborhood resident told PIX11 News. “We had seen the crane the night before as kind of dangling already,” said the witness, whose worries prompted her to avoid the block she normally takes with her kids in the morning. “I’m not lucky, I am aware. I look at things. I look up.”

“I lost it, I absolutely lost it,” said witness Sara Holoubek, on her reaction to the collapse. She had an incredibly close call.  “I realized I had just walked under the crane. You realize how good it is to be alive.”

Jaime Gee, who works on the corner of Worth Street and Broadway, said: “It looked scary from day one. Watching them hauling the cooling towers with these tiny cables was nerve wrecking [sic].  It was just a matter of time before it came down.” The crane was installed last month.

It was not immediately clear what precisely caused the collapse.  When it fell, the crane was being placed in a safe position as a precaution because of high winds, according to Mayor Bill de Bill Blasio.  The crane belongs to the Bay Crane company but was being operated by Galasso, a construction company based in Maspeth.

“This was a company who was putting their crane into a secure position the way we would have wanted them to,” said de Blasio, who noted that the safety protocol had been mandated after two deadly crane collapses in 2008.

PIX11 reached out to a representative of Bay Crane Friday morning, who had no immediate statement. The company, which was founded in 1939, has offices in Long Island City as well as Hicksville, on Long Island.

The type of crane involved is a crawler, and had a boom length of 565 feet – the maximum allowed, and a capacity of 330 tons. The company had recently asked for an extension in order to access the rooftops, according to city officials.

At 6:20 a.m. Thursday, Department of Buildings representatives inspected the crane.  Workers were using the crane to replace generators and air conditioning units at 60 Hudson St., the former Western Union Building. 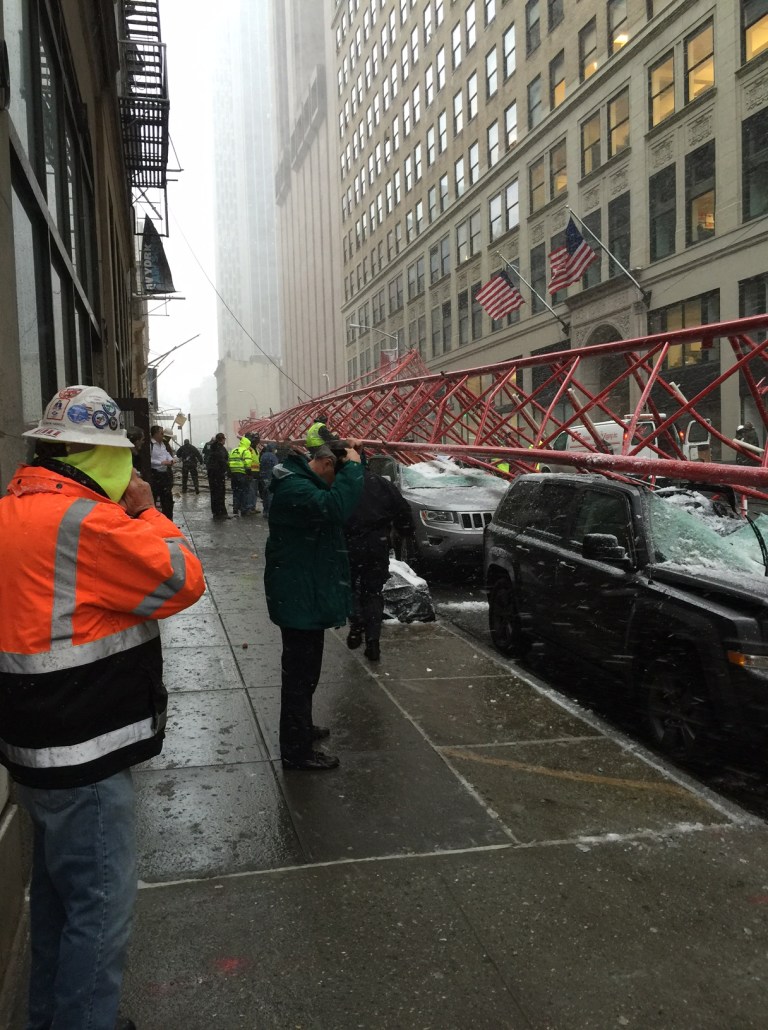 According to a Con Edison spokesperson, crews responded to reports of a gas odor just before 9 a.m.

A Con Edison representative said they hadn’t found any leaks inside the buildings, but had isolated a pipe below street level.  They were at the scene, “sweeping” affected buildings on Worth Street every 15 minutes. The impact of the falling crane also broke a water main, which has since been repaired.

The collapse has prompted the closures of Worth Street between Church and Hudson streets, Greenwich Street at Battery Place and West Broadway at Canal Street.  Subway service was also impacted in the neighborhood.

De Blasio warned residents and people working near the scene that access to the buildings would likely be disrupted for the next several days as the investigation and repairs continue.

Residents or workers in the area may enter the buildings “at the appropriate time” with the escort of the NYPD, de Blasio said.

This is a developing story, check back for updates.

‘Snowfall’ star Gail Bean hits the pole at ‘The Pynk’ …