NEW YORK — The 89th annual Macy’s Thanksgiving Day Parade will take Manhattan this Thursday and is promising to be a one-of-a-kind show featuring high-flying balloons, dancing Rockettes and much more.

“The 89th edition of Macy’s famed holiday procession promises to deliver an unrivaled spectacle of magic for millions of spectators lining the streets of New York City and millions more watching it unfold in homes across the nation,” said Amy Kule, executive producer of Macy’s Thanksgiving Day Parade.

The parade which stretches from 77 Street and Central Park West to Herald Square will feature over 10,000 participants, iconic balloons, floats, and star-studded performances.

There will also be 12 marching bands performing along the parade route including the FDNY Pipes & Drums Band and the NYPD Marching Band.

There will also be performances by the casts of the hit Broadway shows “Fiddler on the Roof,” “The King & I,” and “On Your Feet.”

The famous giant balloons and floats will also cascade down New York City streets, including everyone’s old favorites and some new parade editions.

Four new giant characters will join the parade procession including Angry Birds’ Red, DINO the mascot for Sinclair Oil, Ice Age’s Scrat and his Acorn, and a new version of Ronald McDonald. See the full list at the bottom of this article. 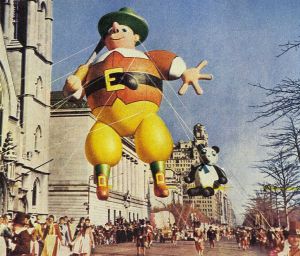 Holiday parking rules will be in effect.

Parade fans can get an inside scoop of all the action on the Macy’s parade website.