GARDEN CITY, Long Island — Shots were fired at a Long Island mall Tuesday, during one of the busiest shopping weeks of the year, leaving one person hurt, authorities said.

It all began with a suspected robbery inside Roosevelt Field mall, located at 630 Old Country Road in Garden City, authorities said.

At least one person was hurt, sources at the scene said. A man was seen being taken away in handcuffs from a store lined with police tape.

The victim was struck outside a store and suffered a gunshot wound to the shoulder, those sources said. The individual has been taken to a hospital in unknown condition.

The shooting comes three days before Christmas as throngs of shoppers descended on stores to finish buying their gifts.

Witnesses said they saw dozens of people running out of the mall as the chaos unfolded. 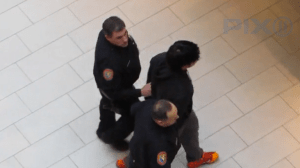