GLEN COVE, Long Island (PIX11) — At some point or another, we’ve all witnessed some seriously incredible rainbows.

Like this gem recently captured after takeoff from LaGuardia Airport.

And who could forget about the legendary double rainbow that made a grown man cry.

‘The latest entry into the awesome rainbow list is a photograph of an extremely rare quadruple rainbow.

It was captured by Amanda Curtis as she waited for her train at the Glen Cove Station Tuesday morning. Soon after snapping the pic, the photo exploded online.

“It’s been surreal I feel like we’re breaking the Internet but in a really great way,” she told PIX11 News.

“I just posted a photo that I thought others would enjoy and apparently they have and now it’s reaching a ton of people.”

The Long Island woman who knows a few things about the colors of the rainbow is the co-founder of a clothing company called Nineteenth Amendment.

She admits she was taken aback by the attention she’s getting online for the now-viral photo. 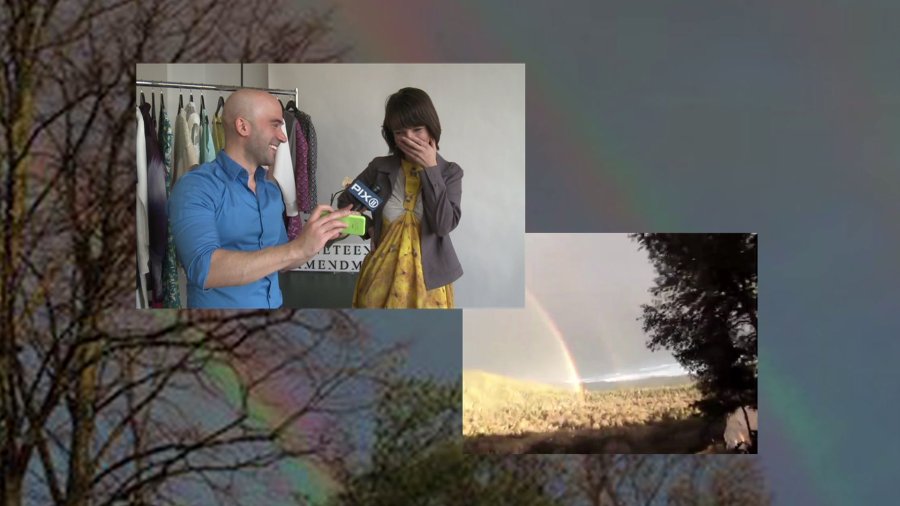 Amanda Curtis, who photographed the quadruple rainbow, checks out the video of the double rainbow for the first time.

“It was more like ‘wow, it’s peaceful right now and that’s really great but yeah let’s get to work because I have a company to run.’”

It was not long ago when a nature enthusiast had a complete meltdown after witnessing a double rainbow and 42 million people took note of it on YouTube.

Many online were quick to recall the popular rainbow freak out in wake of Curtis’ now-epic quadruple rainbow.

Shockingly enough, the fashion designer has never even seen the video.

After seeing it, she quipped, “You know what, I’m glad that I saw it and not this guy because I would’ve worried for his health.”

Just like a true entrepreneur, Curtis is capitalizing on all the attention her photo is getting.

Her start-up clothing company Nineteenth Amendment is offering customers $25 off their first purchase on the site using the promo code “rainbow.”

Fans flock to beloved Long Island pizzeria for one …

Joan Jett and the Blackhearts play ‘Nassau is Back’ …