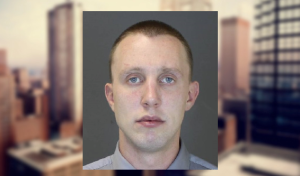 RIVERHEAD, N.Y. – A 27-year-old Hampton Bays man was indicted on more than 30 counts, among them, raping one of his ex-girlfriends and then killing her dog in her presence, prosecutors said.

Justin Suarez was arraigned on a 34-count indictment in Riverhead on Monday after the U.S. Marshal Regional Fugitive Task Force arrested him in the Poconos, Pennsylvania last week, according to the Suffolk County Prosecutor’s Office.

His victims include two former girlfriends, one of whom he is charged with raping in August and December of 2014. The indictment also alleges Suarez stalked the woman, threatened her with a sledgehammer and fatally shot her dog.

“He told her that if she told anyone, he would kill her too,” District Attorney Thomas Spota said. “We executed a search warrant and recovered the remains of the animal and two bullets. For that crime, the defendant is charged with a felony count of aggravated cruelty to animals.”

Suarez pleaded not guilty to all charges.

Southampton police issued a warrant for his arrest on October 9.

When can I enroll in Affordable Care Act benefits?

(NEXSTAR) – Those without health insurance or who want to look into other options will be able to enroll in plans offered through HealthCare.gov beginning next week. Marketplace Open Enrollment will run from Nov. 1 through Jan. 15.

According to the Department of Health and Human Services, this year, four out of five people will be able to find health care coverage for $10 or less per month with extra savings made available under the American Rescue Plan.

Why is everyone hiring and no one getting hired?

FORT WAYNE, Ind. (WANE) — Companies across the country are desperate to hire, and yet some workers still can't seem to find a job.

"I think there isn't an employee shortage, I think there is a process and a system which are in place that disqualify people," said Lisa Mungovan, owner of Mungovan HR Consulting, LLC.

CYPRESS HILLS, Brooklyn — Over two years after a Queens man was struck by an SUV and left for dead in a Brooklyn street, the driver who allegedly fled the scene is facing a slew of serious charges, according to the NYPD.

Police said Ramsaran Mahabeersingh, 57, was arrested Wednesday in connection with the deadly 2019 hit-and-run.

$10K worth of handbags stolen from Manhattan Christian Louboutin

Is it OK to go trick-or-treating during the pandemic?

Plasticizer found in food from McDonald's, Domino's, others

Woman gets life sentence for helping husband plan killings of his estranged pregnant wife, others

Cocaine in lunchboxes smuggled from Puerto Rico to New York