GREAT NECK N.Y. — Authorities saved a 20-year-old college student after a nearly 5,000-pound tree fell into her house and trapped her inside for two hours early Monday. 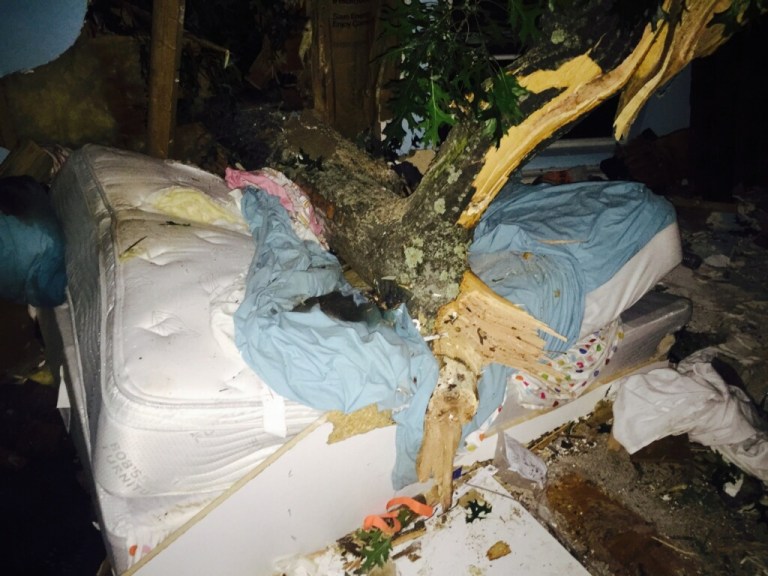 This is part of 5,000-pound tree that crashed into a 20-year-old woman’s bedroom in Great Neck. (Photo: Fire Department source)

A large tree unexpectedly fell over, struck the roof and collapsed into a second story bedroom of 11 Wooleys Lane East home shortly after midnight Monday, according to the Great Neck Fire Department.

The victim, who was asleep at the time, became entrapped by the tree and debris that came to rest on top of her, fire officials said.

According to Chief James Neubert of the Great Neck Fire Department, neighbors were awakened by her screams and the pain she was in was “tremendous.”

Several fire departments along with the Nassau County police responded to the scene and were able to free the victim about two hours after the non-storm related incident.

Neubert said they also had to deal with live wires and had to get PSEG to turn the power off. It took a lot of coordination to lift the heavy tree and get her out, he said.

“One of the major limbs that came off the trunk was on top of her,” Neubert said. “A combination of different things saved her. Being on a bed took some of the cushioning in.”

The Binghamton student, who was on summer break, was taken to a local hospital where she’s receiving treatment for multiple injuries. She is listed in serious but stable condition at this time.

Great Neck Fire Department Chief Joshua Forst said that they’re still evaluating her at the hospital, but it does not appear she has broken limbs.

“Family has thanked everyone and said its a miracle she’s okay,” Forst said.

Mets, Yankees both headed to postseason

Zach Wilson cleared to start at QB against Steelers

How to protect your dog from canine influenza

Wilson cleared by doctors, will start at QB for Jets

How to protect your dog from canine influenza