Goldie Steinberg, 114, passed away Sunday at the Grandell Rehabilitation and Nursing Center in Long Beach.

Born in 1900 in Chisinau (now called Kishinev) in the region of Moldova (now part of Romania), Steinberg was believed to be the oldest-living Jewish person in the world.  At age 3, she survived the Kishinev pogrom, where 40 Romanian Jews were killed, 600 injured and more than 1,500 homes and businesses destroyed.

She moved to Brooklyn when she was 23 and worked as a seamstress. 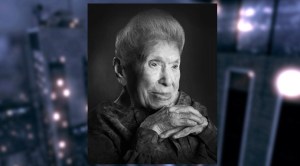 Steinberg moved to Grandell in 2004 where she spent her time watching the New York Yankees on TV, knitting and helping fellow residents.

“She touched the lives of all the residents here. She will be remembered as a warm, caring person. She was an inspiration to all of the residents and staff,” said Baruch Gilberstien, administrator at Grandell Rehabilitation and Nursing Center. “She showed so many how you can live a productive and rewarding life well into longevity.”

What is New Jersey getting out of the stimulus bill?