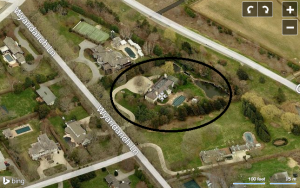 The $9 million mansion at 50 Wyandanch Lane in Southampton Village was destroyed in a fire, officials said. (Photo: Bing Maps)

SOUTHAMPTON, N.Y.  — Authorities say a $9 million mansion in Southampton Village was destroyed in a blaze that took firefighters from more than a dozen departments seven hours to extinguish.

Newsday reports the fire at the six-bedroom, 8,300-square-foot home at 50 Wyandanch Lane started just before 12:30 p.m. Saturday and burned well into the evening. Mayor Mark Epley tells the newspaper residents of the two-story home escaped before firefighters arrived and were not injured.

There were reports, however, of some firefighters being treated for smoke inhalation and elevated blood pressure.

Epley says the fire started in a kitchen and spread to the surrounding walls and ceiling. It did not spread to other homes.

The owners of the home are listed as Lawrence and Marilyn Friedman of Friedman Properties, whose clients include fashion power houses like Polo Ralph Lauren, Donna Karan and Dolce & Gabbana, Newsday reported.

The home last sold in 2004 for $7 million. The total property value is currently estimated at $9.2 million, properties records showed.