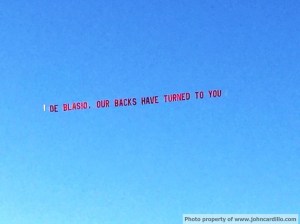 A gigantic anti-de Blasio banner could be seen above the Hudson River Friday morning.(John Cardillo)

The gigantic sign read “DE BLASIO, OUR BACKS HAVE TURNED TO YOU” in red text.

The plane made five loops along the Hudson River around 9 a.m. between the Statue of Liberty and the George Washington Bridge.

Former NYPD cop John Cardillo explained the sign on his blog shortly after it took flight.

Cardillo writes that his statement represented the feelings of “hundreds” of “NYPD cops, detectives, supervisors.”

The statement outlines the group’s view of De Blasio’s lack of support, and the disapproval of using De Blasio’s biracial son, Dante as a political pawn.

“… we are outraged by the mayor’s incendiary rhetoric, and for facilitating the current hostile climate towards the NYPD …

It is our opinion that Mayor deBlasio’s dangerous and irresponsible comments about his and his wife’s concern for their son’s safety at the hands of the NYPD fueled the flames that led to civil unrest, and potentially to the deaths of PO Wenjian Liu and PO Rafael Ramos, as well as the continued threats against NYPD personnel. The Mayor shows us no respect, and encourages the public to follow his lead…

We no longer have confidence in Mayor deBlasio, nor in his ability to lead New York City and promote the values that both the NYPD and the good law abiding citizens of the city hold dear. Mayor deBlasio turned his back on us long before we turned our backs on him. “

Cops literally turned their backs to Mayor De Blasio when he walked into a news conference addressing the murders of Officers Ramos and Liu.

Cardillo says the group insisted on waiting until the plane was airborne before publishing the statement out of concern the Mayor “might order NYPD aviation to divert the plane,” according to the Daily News.

Cardillo told the Daily News the group pooled $1,200 to get their message airborne.

Missing NJ man feared someone was following him