CROWN HEIGHTS, Brooklyn (PIX11) — A trio of violent thieves allegedly punched a woman in the face so hard they broke her nose outside a Brooklyn liquor store then mugged her, police said Monday. 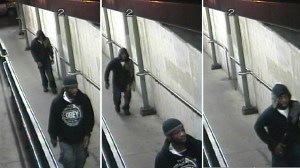 This pair is wanted for allegedly punching a woman so hard they broke her nose then stealing her purse and cellphone on Oct. 2, 2014, in Crown Heights. (Photo: NYPD)

The attack happened about 2:30 a.m. Oct. 2 in front of 680 Franklin Ave. in the Crown Heights section of Brooklyn, NYPD said.

Caught by surveillance cameras, the men approached a 21-year-old woman, pushed her against a wall and punched her in the face multiple times.

They threw her to the ground and dragged her across the sidewalk, then snatched her cellphone and purse. The victim was taken to a hospital with a broken nose and cuts on her face, and she is expected to survive.

Anyone who recognizes the culprits is urged to call NYPD’s anonymous Crime Stoppers tip line at 800-577-TIPS, visit www.NYPDCRIMESTOPPERS.com, or text their tip to CRIMES (274637) then enter TIP577.