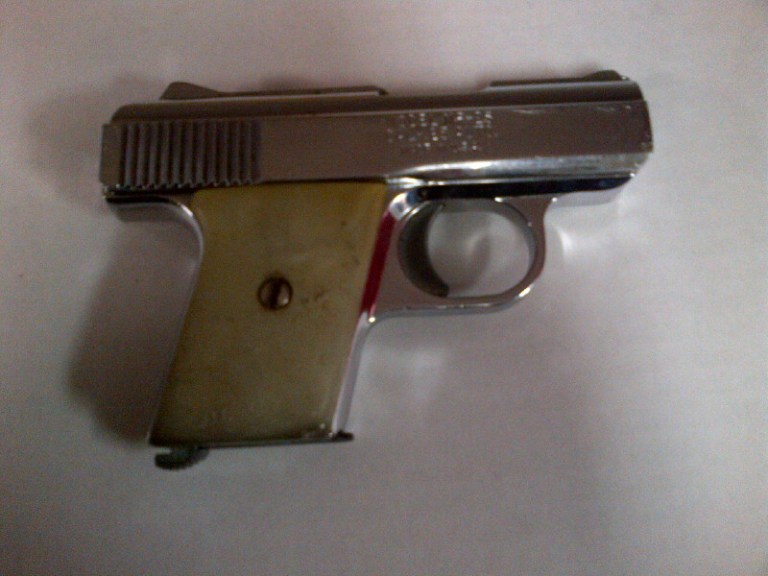 Police in Brooklyn recovered a .25 caliber Ravens Arms handgun when they were investigating an illegal livery cab operation in East Flatbush. (Photo: NYPD)

EAST FLATBUSH, Brooklyn (PIX11) — Police in Brooklyn shot a man who refused to comply when they discovered he had a gun on him.

The plain-clothed officers were patrolling the East Flatbush area in an unmarked police car Friday around 9:38 p.m. when they saw a 1999 black Ford Ecoline van illegally operating as a livery cab and picking up a passenger on Avenue D and Utica Avenue.

When the officers stopped the van at Utica Avenue and Foster Avenue, they noticed 29-year-old Marlon Cox in the front seat with his hands inside his pockets. Cox refused to comply with multiple orders to remove his hands from the inside of his jackets, and the officers opened the passenger-side door.

The officers struggled with Cox as he continued to hide his hands in his pockets. When they discovered a .25 caliber Raven Arms handgun in his hand, one officer fired his gun once, grazing Cox in the right arm.

The officers were transported to Maimonides Medical Center and treated for tinnitus. EMS transported Cox to Kings County Hospital, where he is listed in stable condition.

The gun was recovered at the scene, and Cox, of 218-39 100th Ave. in Queens, was arrested and charged with possession of a weapon and resisting arrest.

BAYONNE, N.J. — There were large police scenes in both Bayonne and Jersey City early Tuesday morning after an officer-involved shooting and police chase in Bayonne, according to authorities.

The Hudson County prosecutor's office said they were investigating the officer-involved shooting that occurred just before 4:30 a.m. in Bayonne, in the area of Hobart Avenue and East 5h Street.