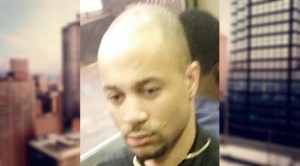 The incident occurred on Friday, June 19, police say. The 37-year-old woman was riding the A train when the suspected pervert came up behind her and started to touch himself. The woman walked away but not before snapping a picture of the culprit, police say.

The victim says the man “exposed himself and masturbated to completion on a crowded uptown A train,” Gothamist reports.

The man then fled the scene shortly after the woman photographed him, police say.

He is described as a black male, bald and in his mid-20s. He faces charges of public lewdness when he’s finally arrested, police say.

“Not how I wanted to start my morning,” the woman told Gothamist.

If anyone has any info regarding the suspect, please contact the NYPD’s Crime Stoppers Hotline at 800-577-TIPS.