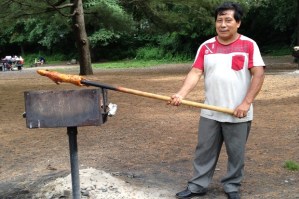 Someone called 911 on a man who was grilling a Guinea pig in Prospect Park Saturday morning. (Photo: DNAinfo New York)

PROSPECT PARK, Brooklyn—The alarmed resident who called 911 to report a man “mistreating a squirrel” in Prospect Park got it all wrong. It was actually a Guinea pig.

Police responded to an emergency call Saturday around 9:30 a.m. to find a man grilling the animal with a 4-foot wooden skewer over a barbecue near the Ninth Street entrance. The man, who told DNAinfo New York that he is from Ecuador, confirmed that the animal was a Guinea pig, which is a popular dish in South America.

Police did not take any action against the man, as it is legal to grill meat as long as it’s in one of the park’s designated barbecue areas, an NYPD spokesman said.

It is illegal to hunt or trap park animals such like squirrels. Squirrels also can’t be kept as pets in NYC.

New Yorkers celebrate Juneteenth as it becomes a national holiday

Brooklyn celebrates Juneteenth as it becomes a federal holiday

NYC's Juneteenth celebrations feature a weekend's worth of activities

MOTT HAVEN, the Bronx --- A volunteer for mayoral candidate and Brooklyn Borough President Eric Adams was repeatedly stabbed in the Bronx on Sunday with an ice pick, Adams said.

The 42-year-old man was attacked near 149th Street and Morris Avenue, police said. His injuries were not considered to be life threatening.

The Foo Fighters were set to shake the famed arena with a Sunday concert — the venue's first show in more than 460 days.

LONG BRANCH, N.J. — A beach party that drew thousands to a New Jersey shore city prompted officials to shut the event down and resulted in four arrests, authorities said.

The public safety director’s office of Long Branch said in a Facebook post Sunday that a social media post started the gathering along the beachfront around Pier Village Saturday night and attracted “what turned out to be thousands of young people.”

At least 5 shot overnight in NYC, including 2 teens, man in wheelchair

Fireworks retailer warns of July 4 shortage: Here are the states where it’s legal to stock up

What to know about child tax credits ahead of July 15

Could your medication raise your risk for heat-related illness?

CDC reports increase in respiratory viruses, especially in kids, as masks come off in parts of US

App that turns you into a cartoon: What you need to know about Voila

Jeep plows into family in the Bronx, injuring 6 people: NYPD