NEW YORK (PIX11) – Thankfully it’s nearly winter and time to wear gloves because a straphanger took a photo of what may be the grossest subway find ever — an apparently semen-filled condom tied snugly to the same pole millions of commuters grip daily. Windsor Terrace resident Ryan Quinn spotted the filthy latex surprise on a Manhattan-bound F train on his way to work around 8 a.m. Friday.

After getting on at the Fort Hamilton Parkway stop, Quinn says he saw a man sleeping on the bench, taking up the only available seats.  He decided to stand and grabbed the pole above him, but a couple of stops later the train filled and he had to make room, sliding his hand down the pole.

“I was about to put my hand down when I saw this thing hanging — I did a double-take and thought, ‘That’s a f****** condom,” Quinn said.  “Nobody else even noticed.  There was a man sitting below and he seemed oblivious.”

He wisely declined to sit below the suspended contraceptive, and warned the first straphanger who eyed the seat.

“She looked up, saw the condom swinging loosely as the train swayed and looked completely horrified, she said ‘Oh my God. Oh gross.’”

Quinn said multiple people came close to “wiping their heads on it accidentally as they tried to sit” before he or the other riders had a chance to warn them. 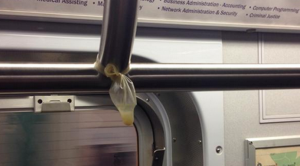 “Nobody was really paying attention enough to notice,” Quinn said, “Eventually there was a small team of us pointing it out.”

The subway is a known house of horrors for hypochondriacs, but this could be the most sickening, documented encounter in recent memory.

An MTA spokesman could not confirm the incident, only saying that he finds the photo repulsive.  All trains are thoroughly cleaned at the end of a run and at the end of the day, according to the MTA.

CYPRESS HILLS, Brooklyn — The NYPD released new surveillance images of a man they say randomly slashed an MTA conductor across the face on a subway in Brooklyn Wednesday night.

Authorities said just before 11:30 p.m. at the Crescent Street subway station in Cypress Hills, a 52-year-old off-duty MTA conductor was aboard a southbound J train when he was approached by the unknown man.