BOROUGH PARK, Brooklyn — One person is dead and three people were injured after an explosion in Brooklyn.

According to the FDNY, the fire broke out around 1 p.m., at 13 Avenue and 43 Street in Borough Park. 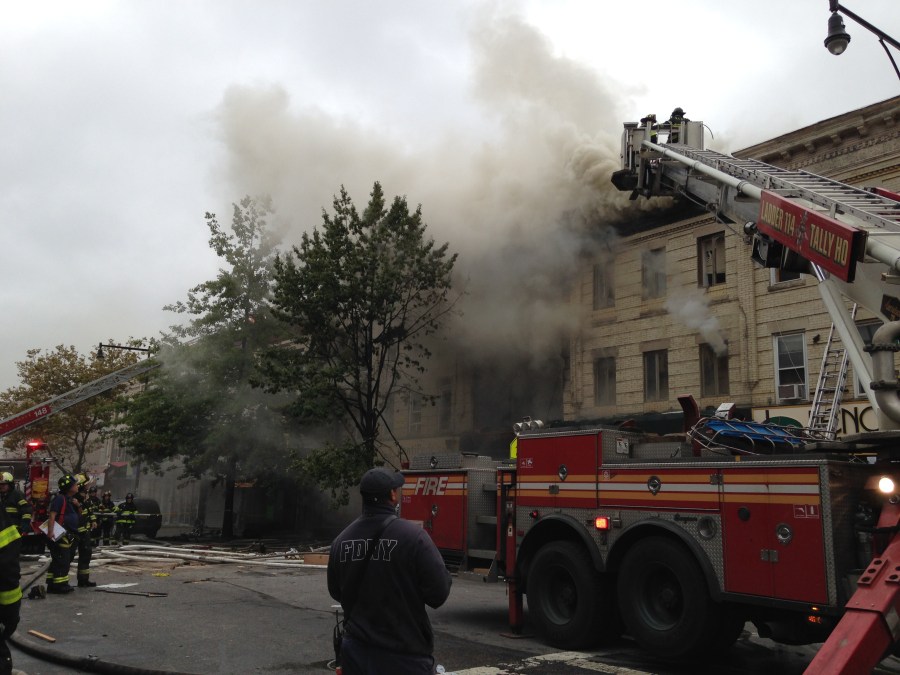 The fire in the three-story building quickly escalated to four alarms. More than 200 firefighters responded to the scene where the front of the building was blown into the street.

According to the FDNY, one woman was pronounced dead at the scene.  Councilman Brad Lander says the woman was in her 60s and lived on the third floor of the building.

Governor Andrew Cuomo released a statement regarding the “disturbing trend” of building explosions around the five boroughs.

Three civilians, including a 9-year-old boy, were injured from the blast. Five firefighters were also injured. They were treated at the scene.

Mayor Bill de Blasio said the incident “shows some signs of being gas-related.”

“Of course, to take stove with you it entails disconnecting the gas line which leads us preliminary to look in that direction for the cause of this explosion, Nigro said.”

“Earlier today, an explosion took place at a building in the Borough Park neighborhood in Brooklyn. This explosion is the latest in a disturbing trend of incidents that occurred in Harlem and the East Village,” said Cuomo.

Governor Cuomo says he is directing the State Department of Public Service to take over the investigation.

“On behalf of all New Yorkers, my thoughts and prayers are with those who have been impacted by today’s explosion, especially the friends and family of those lost or injured,” Cuomo said.

WINDSOR TERRACE, Brooklyn (PIX11) — A cyclist was hospitalized in critical condition early Friday in Brooklyn after being struck by an SUV that fled the scene, according to the NYPD.

Police said the man in his 30s was riding an electric bike around 1 a.m. when he was struck by the vehicle near the intersection of 10th Avenue and 18th Street, in the Windsor Terrace neighborhood.

A moratorium on evictions in New York ended on Saturday, Jan. 15, potentially placing thousands of residents in danger of losing their homes. The Legal Aid Society called on state lawmakers to enact long-term solutions to protect tenants. Gov. Hochul has said she’s having conversations with the Legislature on how to combat the housing crisis.

A military medical team is now on the ground in Newark, New Jersey after arriving early Thursday to assist with the surge in COVID-19 patients and staff shortages that has left University Hospital overwhelmed.

Harlem great-grandmother with no hot water bathes with coffee pot

11-year-old child in critical condition after being struck by car in Queens: NYPD

How clutter negatively impacts your health

Man sentenced in 2019 shooting of girlfriend in Queens

Dog chews off own leg in fight for survival