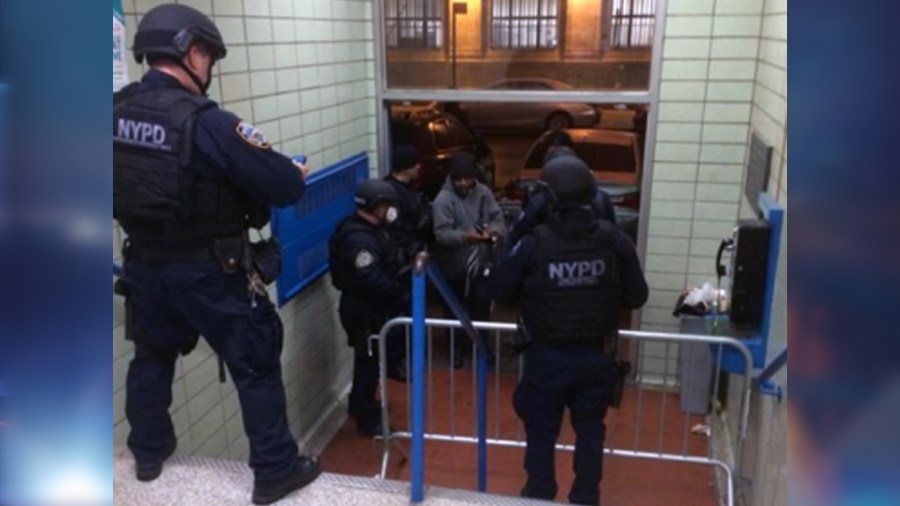 In an exclusive picture given to PIX11’s Mary Murphy, Emergency Service Unit assembled at the 81st Precinct in response to latest threats against NYPD.

BEDFORD-STUYVESANT, Brooklyn (PIX11) — Police are on high alert after receiving “credible” threats targeting two of their Brooklyn precincts days after the execution-style murders of two NYPD officers, according to the Sergeants Benevolent Association.

In tweets posted Tuesday night by the SBA, the association warns of the Black Guerrilla Family, which allegedly threatened to “storm” the 79th and 81st precincts and “shoot it out” with officers inside.

Important info re credible attack from a CI: Black Guerilla Family to storm the 079/081 Pct Station Houses & shoot it out with MOS.

At least one of the precincts took extra precautions and beefed up its security by adding emergency service units, as seen in a photo taken inside the 81st Precinct lobby, above, and obtained by PIX11 News.

“Cowardly threats of violence against the brave men and women of our police force will not be tolerated,” Mayor Bill de Blasio said in a statement.

“New York City stands with our police officers in this time of tragedy, as we do every day, and our city will not be intimidated by those spouting hateful, violent messages. We will protect the men and women who protect us.”

SBA told officers to carry their firearms at all times — on duty and off — and to stay in pairs.

On Saturday, officers Rafael Ramos, 40, and Wenjian Liu, 32, were ambushed and killed by a gunman while they were sitting in their patrol car outside the Tompkins Houses in the Bedford-Stuyvesant section of Brooklyn.

Man struck boy, 12, with a crutch in unprovoked attack …