BEDFORD-STUYVESANT, Brooklyn — Crews battle a fire that broke out at a building in Brooklyn early Thursday.

Authorities responded to the blaze at a commercial building at 376 Vernon Ave. in Bedford-Stuyvesant neighborhood at about 3:42 a.m.

About 39 units and 175 firefighters are on scene, according to fire officials.

Firefighters tried to attack the fire from the interior, which officials said was filled with “a lot of stock and a delivery van of some type,” but they were later pulled from the building and began to fight the flames from the exterior, fire officials said.

Fire officials said the entire building is “in very poor condition,” with the roof and rear wall collapsed. There was also a partial wall collapse.

No injuries have been reported at this time, but the frigid cold weather made it a challenge for firefighters to battle the blaze with the risk of frostbite and icy conditions. Fire officials said crews were well prepared.

A rear building near the blaze was evacuated as a precaution. The number of residents displaced was not immediately disclosed, according to fire officials.

Fire officials expect to operate on the fire for “most of the day,” but they are making progress in completely putting out the blaze. 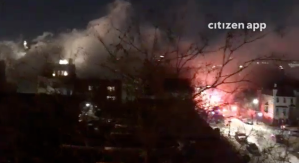 AIR11 is over the scene:

Brooklyn mom forced to use umbrella inside leaky NYCHA home