Police are looking for two men who attacked and robbed a food delivery man in an elevator of a Bronx apartment building. (NYPD)

MT. HOPE, the Bronx — Police are looking for two men they say attacked and robbed a food delivery man in the elevator of a Bronx apartment building in May.

The victim was making a food delivery to an apartment at 215 Bush St. in the Mt. Hope section of the Bronx on Friday, May 31, around 1 p.m. when  two unidentified men followed him into the building’s elevator, police said.

Once the elevator doors closed, the men began hitting the delivery man numerous times with closed fists, causing visible bruising and swelling, according to authorities.

The two men then stole $200 in cash from the victim’s pocket as well as his cellphone, and fled westbound on Bush Street, police said.

The first man is described by police as about 6 feet tall, weighing 160 pounds, and last seen wearing a black and gray hooded sweatshirt, black durag, black pants, and red sneakers.

The NYPD has released the below surveillance images of the men police are looking for. 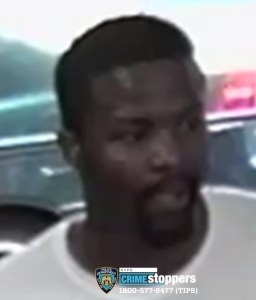