THE BRONX (PIX11) — Police are looking for a teen who they say violently attacked and robbed a mother while she was carrying her infant in the Bronx.

The 24-year-old woman was walking along East Tremont Avenue at about 12:45 p.m. Nov. 28 with her 3-month-old strapped to her chest, police said Monday. 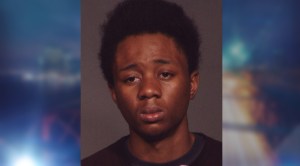 Police say Alonzo Brown kicked a mother and her baby to the ground before stealing the victim’s cellphone Nov. 28, 2014, in the Bronx. (Photo: NYPD)

The attacker, identified by police as 18-year-old Alonzo Brown, ran up behind the woman and kicked her, causing her and the baby to fall to the ground, police said. He then ran off with the victim’s cellphone.

The woman and child were taken to a hospital, treated and released.

Anyone with information on Brown’s whereabouts is asked to call Crime Stoppers at 1-800-577-TIPS.

Dozens without a home as a fire rips through a building