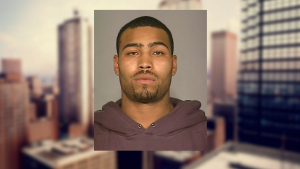 Alfonso Skeeter, 27, is wanted for the murder of Roy Rosello. (Photo: DCPI)

WEST FARMS, the Bronx – Police have named a suspect in the murder of 20-year-old Ray Rosello after he was fatally shot in the Bronx early Sunday morning.

Alfonso Skeeter, 27, is wanted in connection to Rosello’s death, according to the NYPD.

Police observed Rosello with gunshot wounds to the torso at the scene. He was taken to a local hospital, where he was pronounced dead.